The new iPad’s retina display, is it worth it? 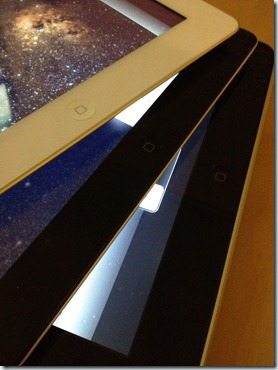 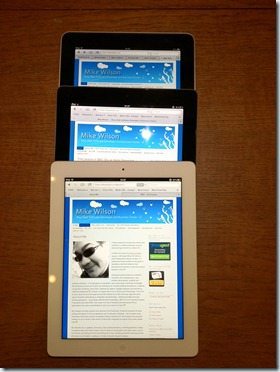 The new iPad is finally here and it’s not called the iPad “3”, “HD” or any other moniker. For the purposes of the review, I’ll refer to the latest iPad as the “3”.

The headline feature is the new “Retina” display which while not sporting quite as high a pixel density as the iPhone 4/4S does (the iPhone 4/4S if scaled up would have more pixels than the iPad 3), Apple have quadrupled the number of pixels in the iPad’s capable display and Apple claim that it is better than before. 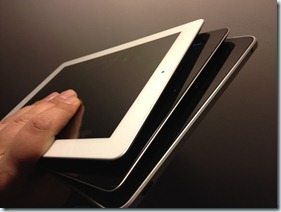 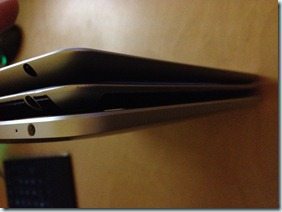 All three generations of the iPad share the same solid construction with an aluminium body and a toughed glass screen. The buttons and ports are nearly identical although the iPad 2 and 3 both have front and rear facing cameras. The iPad 3 improves on the rear camera by offering the same camera unit available in the iPhone 4 (notably not the latest one from the 4S). 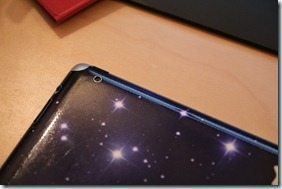 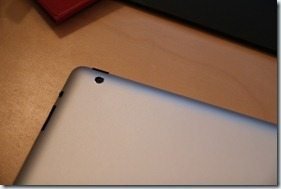 I rarely use the cameras on the iPad and expect to use them even less now that iOS 5’s “Photostream” feature shares camera roll images taken on the iPhone (or uploaded from a PC or Mac) across all devices. 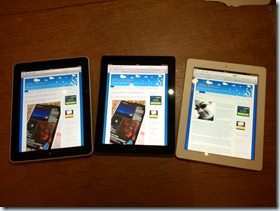 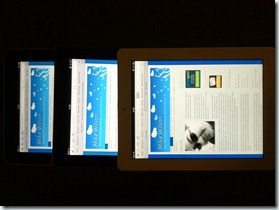 The iPad 1 and 2 share the same screen although on these copies the iPad 1 screen is marginally superior in the dark as the iPad 2 exhibits a little backlight bleeding around the edges.

The iPad 3 shows no backlight bleeding but it gets warm after a few minutes of use on the left hand side.

None of these issues are dealbreakers and you’d probably have to be looking for faults to find them. In all three cases, there are no dead or stuck pixels and the screens render content beautifully. 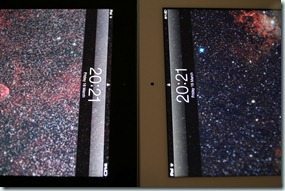 On first glance, I saw absolutely no difference between the original and the new iPad screens. It took a fairly close inspection to begin to notice the improvements, mostly around the typeface of fonts. Clearly it was time for a closer inspection…

The first test was to get a microscope up to the screen to see what the pixels actually look like. And here they are, at approximately 40x magnification and the photo was taken using an iPhone 4S: 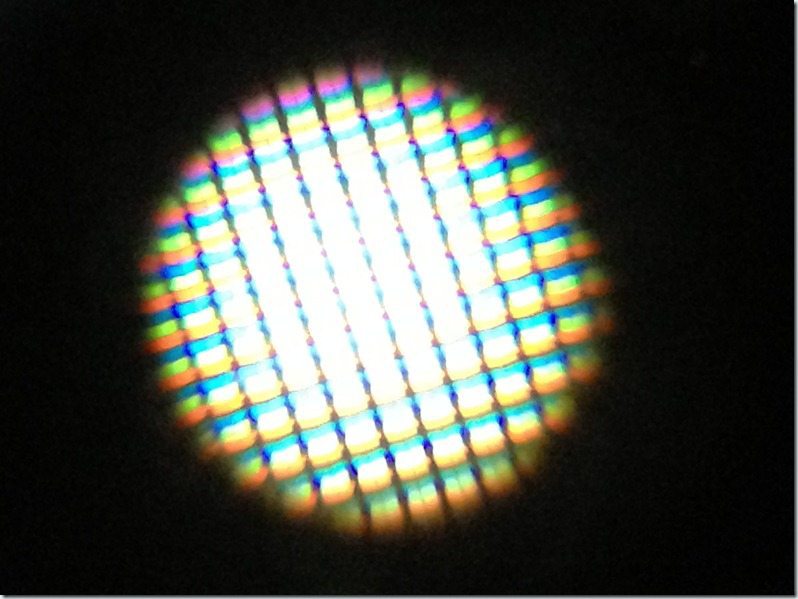 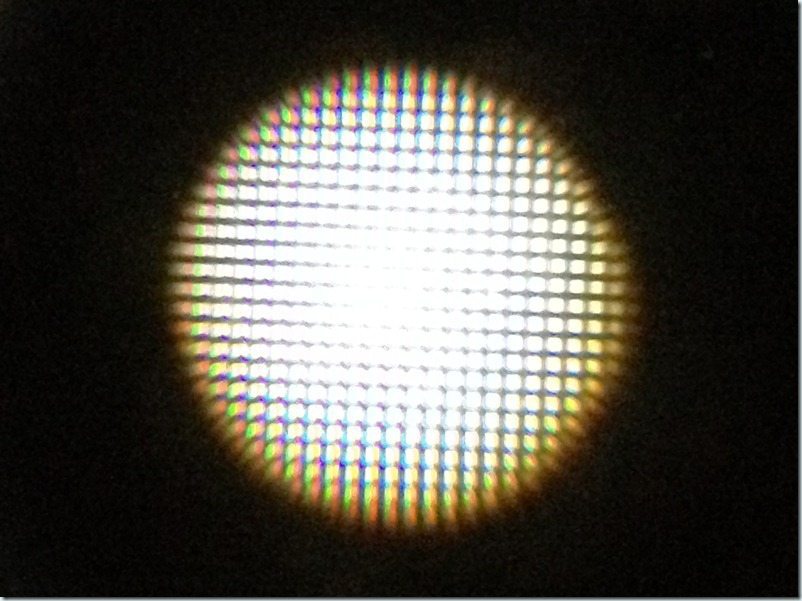 The pictures don’t do it justice. The new display really is packed with twice as many pixels and the gaps between the pixels are apparently smaller.

You don’t need a microscope to see the difference. Take a look at the following comparison shots between the iPad 2 (in black) and the iPad 3 (in white): 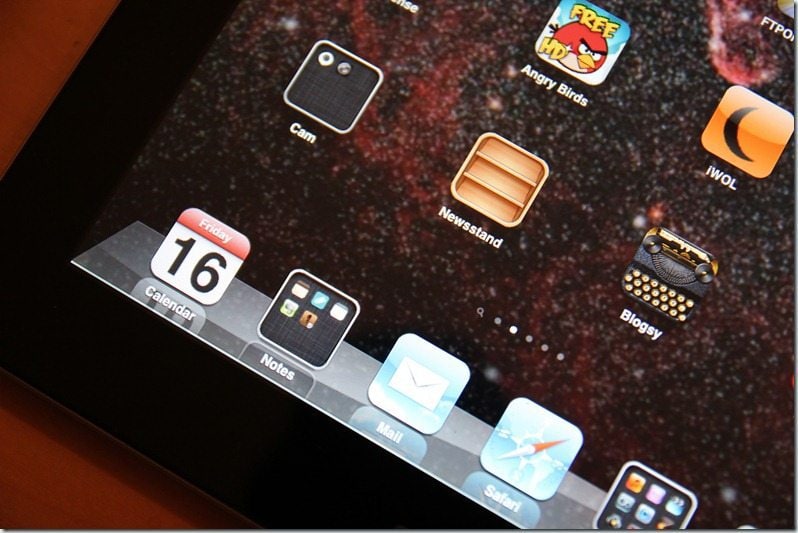 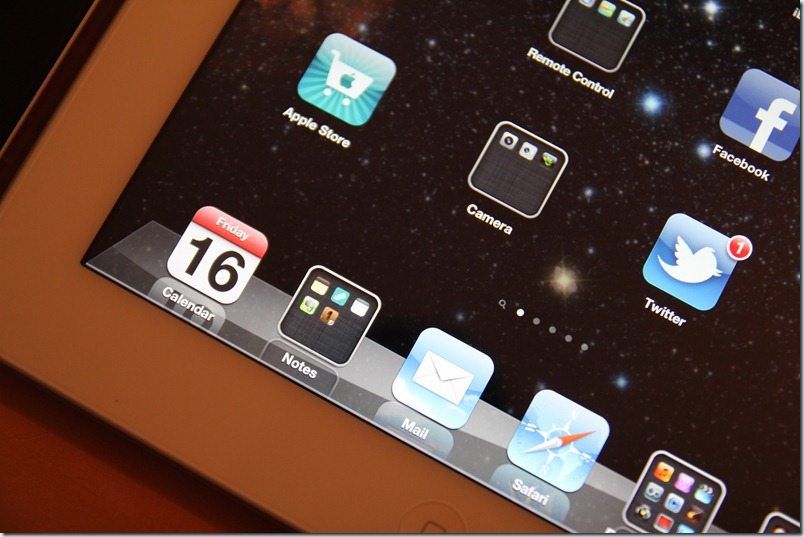 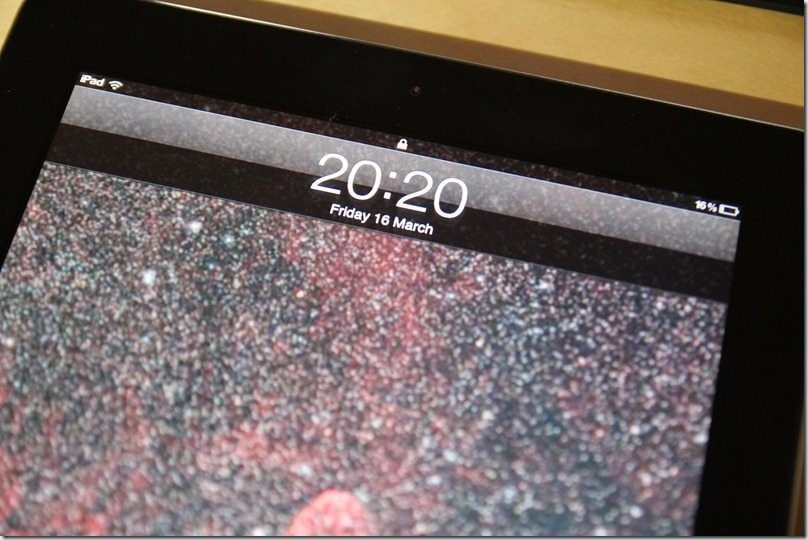 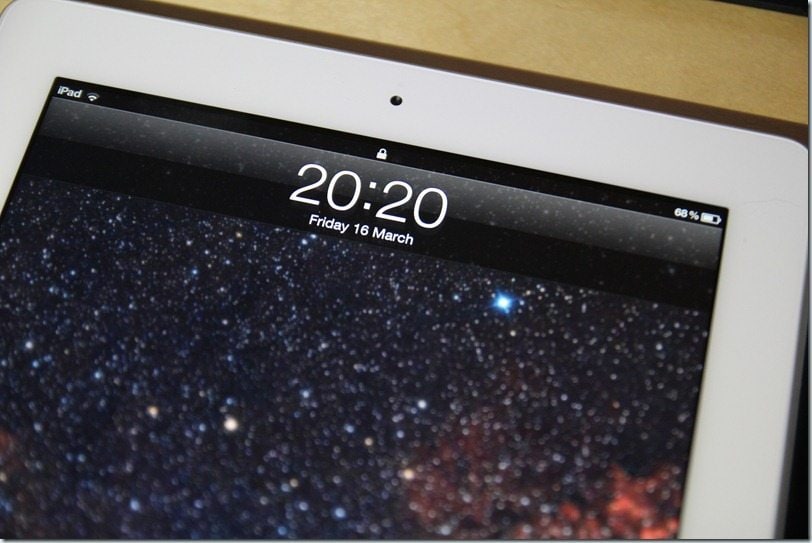 The difference becomes obvious when reading lots of text on screen. The non-retina display works very well using clever anti-aliasing techniques to give a readable page. The retina display gives a pin-prick perfectly sharp view across entire pages of content without needing to zoom in or employ clever mathematical trickery to prevent blocky text. 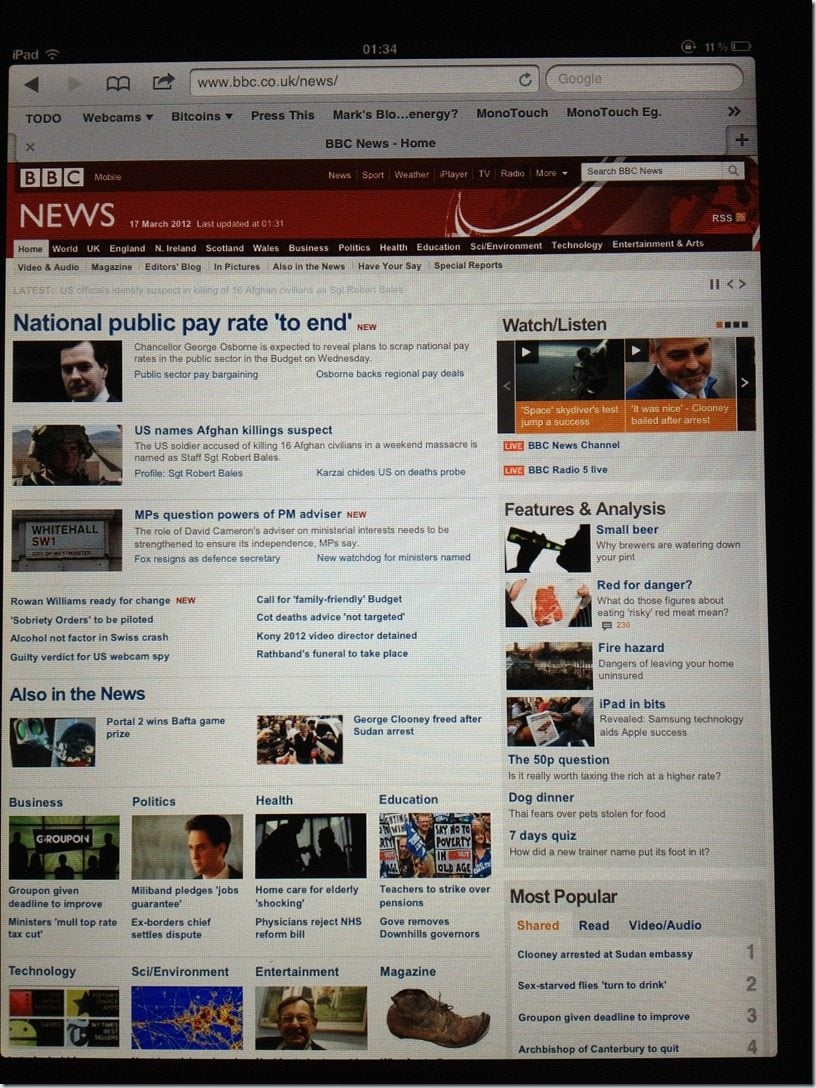 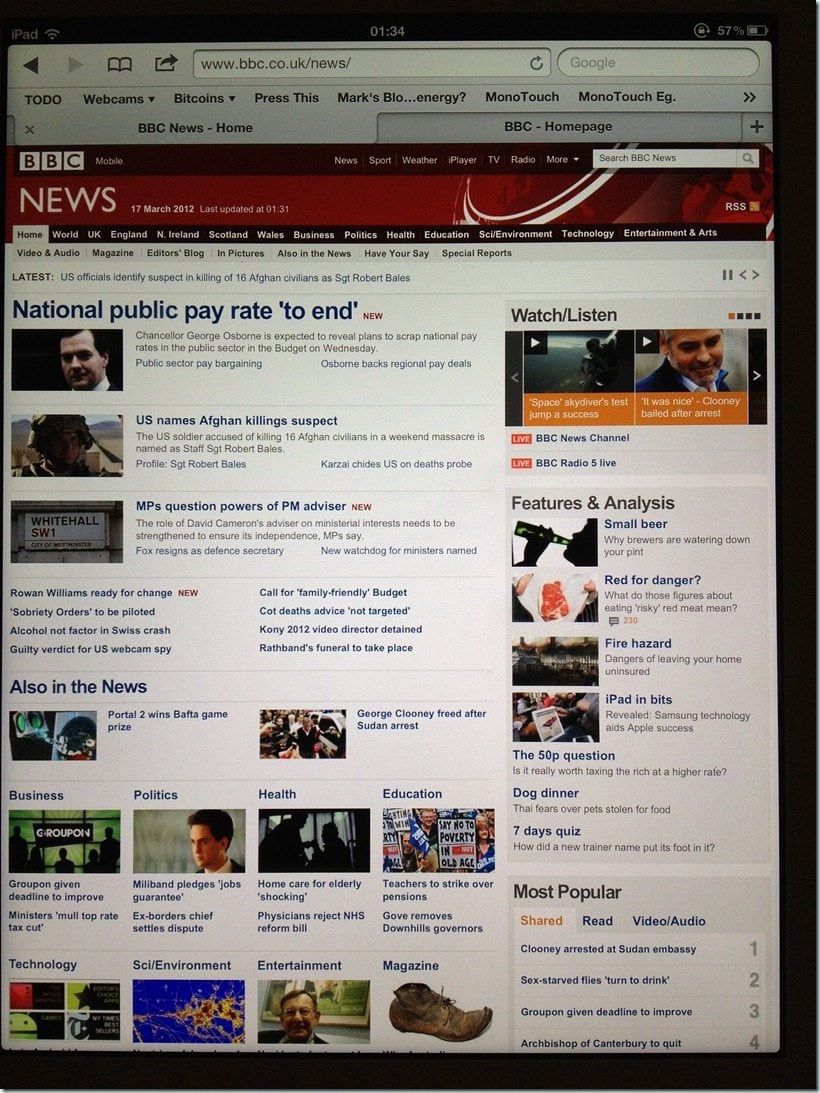 Most of the time, I don’t think the average Joe wouldn’t be able to tell the difference between a retina screen and a non-retina screen. The difference becomes even less pronounced when viewing images, in my tests I couldn’t confirm that the retina screen “popped” or was delivering higher saturation than the non-retina screen. Where the retina display really does bring benefits is being able to view large, complex websites without zooming in and in the creation and reading of documents and emails since you can do so now using a smaller view and tinier fonts. It’s nice.

The iPad 2 is still available from Apple and in their own words it is, “Still every bit as amazing”.

The latest iPad is amazing. It’s beautiful and it’s quick. It’s as quick as the iPad 2 is for all tasks and the extra oomph in the GPU allows it to play games at eyeball-rocking resolution even held mere inches from your face. That’s nice, but the original iPad and iPad 2 aren’t slouches and have some beautifully optimised games too. Some of the latest “Retina-enabled” games for the latest iPad are double the download size, so bear that in mind if you’re planning on playing lots of HD-busting games!

But what about 4G?

If you’re in the UK, like I am, the “4G”/LTE addon isn’t going to work here. Despite the fact that we’re all still using a decade-old 3G technology, there’s no 4G on the horizon for the UK. Whilst there are trials, the Ofcom sale of spectrum for licenses isn’t taking place until the summer of 2012 which means networks won’t be offering faster speeds until 2013 at the absolute earliest. And the iPad uses 700Mhz version and 2.1Ghz version, geared for American markets. The 700Mhz version will never work in the UK (that’s used for TV) and the Ofcom sale of spectrum is for.. wait for it… 1800Mhz. Yeah, so forget it!

Thanks to @steven_amani for assistance with fact checking and @jaffo for the alert on the article’s original broken formatting!

Next post: Second picture in BBC Sky at Night Magazine