Just for fun I thought that I’d set my telescope up and instead of putting its time towards a project, I just pointed out from our own galaxy to see if I could spot other galaxies, far, far away.

You see, all the stars you see in the sky at night with your eyes are all in our galaxy – bar none. Almost all of the beautiful pictures of nebulae and interesting space scenes come from our own galaxy, the Milky Way, it’s all in here:

But of course, the galaxy that we find ourselves in isn’t alone. So looking up around 10/11pm to the East, you’ll see the constellation of Leo rising above the horizon. There are a lot of interesting things to see in Leo but I’m not interested in those objects for the moment.

Instead, I deliberately chose an area of the sky that is rather dull, just north of the unimaginatively named star system, “93 Leo”. It’s a double star (two suns orbiting each other) approximately mag 4.5. “Mag”, or “Magnitude” is a measure of the apparent brightness of an object and each point of magnitude is 100 times brighter (or dimmer) than the previous. 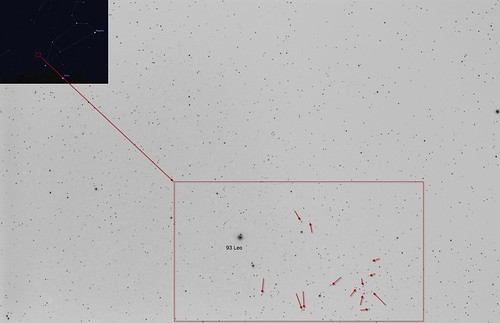 (93 Leo, at 4.5 mag is not visible to the naked eye from my location and has to be observed through strong filters to cut out the background noise).

I took six, fifteen minute exposures and combined them together, deducted flat, dark and bias calibration frames (to remove artefacts from the imaging process) and processed the image data and to my surprise I found several other distant and dim galaxies in the picture. I looked up all the galaxies in the area using Stellarium and have marked the location of the galaxies in the image: 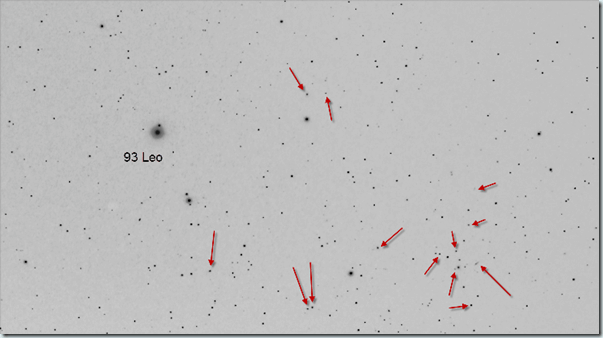 These galaxies may seem insignificant, but that is merely the consequence of the vast cosmic distance of intergalactic space between the galaxies. There is a black hole at the centre of each galaxy, but the one at the centre of this image’s brightest galaxy (NGC 3842) is SUPERMASSIVE and has a mass of ten billion times the size of our sun.

It’s also amazing that this little unassuming mark, denoting the presence of NGC 3842 was caused by photons (like little balls of energy) of light that have travelled 320,000,000 light years. That is, they’ve been travelling in the freezing cold and black of space, hitting nothing (not even a speck of dust) and fell through my telescope, filter and then onto the camera and their journey was recorded.

The fossil record shows reptiles starting to evolve around 300 million years ago. By the time of the first reptiles the light from this particular distant galaxy had already been travelling for 20 million years.

Think of the odds!

Next post: First picture in BBC Sky at Night Magazine