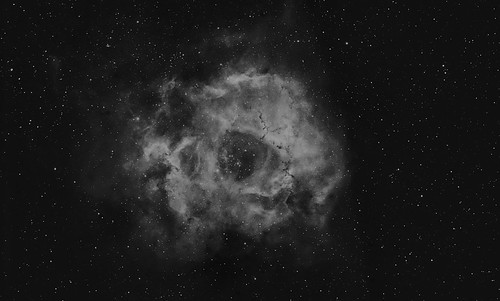 My latest image was taken last month, on the 12th December 2011. It’s shows a view of the Rosette Nebula in Hydrogen Alpha (656nm +/- 7nm). It’s a careful ‘slice’ of the full colour (white) light spectrum that appears in the deep red potion of the spectrum.

This shows clouds of gas, excited by heat and radiation from nearby stars, giving off a red light. I’ve turned the image black and white as it shows up the structure better.

“The cluster and nebula lie at a distance of some 5,200 light-years from Earth (although estimates of the distance vary considerably, down to 4,900 light-years.[3]) and measure roughly 130 light years in diameter. The radiation from the young stars excite the atoms in the nebula, causing them to emit radiation themselves producing the emission nebula we see. The mass of the nebula is estimated to be around 10,000 solar masses” – Wikipedia

I imaged this for the first time with exactly the same filter (using a 5” Newtonian telescope and a DSLR camera) back in March 2011.