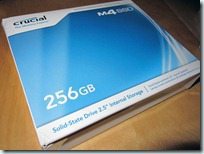 Whether your computer is a desktop or a laptop, the single best upgrade that you can treat your computer to is a solid state drive. I’ve been a long-time advocate for SSD’s and use them in all my builds. Whilst they’re more expensive per gigabyte than a traditional spinning platter hard drives, they deliver blistering low-latency speed for reading and writing as well as having no moving parts which makes them ideal for laptops.

I’ve had an Intel X-25 160GB SSD in my laptop since 2010 when my laptop was a 13” MacBook Pro (Core 2 Duo, 2009 model). I’ve since upgraded to a 15” MacBook Pro (Core i5 w/ high-res antiglare screen) and kept the SSD. Compared to the mechanical drives that Apple ships, an SSD makes a huge difference to startup and shutdown and application startup times & responsiveness, and I’ll never use a laptop without a solid state drive again. Ordering a solid state drive from Apple is an expensive lottery, one never knows what drive you’ll get with your MacBook (it could come from either Toshiba or Samsung). And honestly, Toshiba and Samsung aren’t the fastest, nor the most reliable SSD manufacturers.

A quick history lesson: In 2008, Intel’s X-25 SSD’s were disruptive – they delivered much better read and write rates than all the other mainstream SSD’s in the market, besting the ubiquitous Samsung second generation SSD’s (the ones Apple were using) by some margin. As it turns out, the Intel controllers were more reliable too. Other manufacturers have since caught up and with the introduction of “SandForce” controllers (drives are made up of non-volatile flash memory storage and a controller which controls access to the storage) we now see other brands; Crucial, Corsair and OCZ battling it out at the top and mainstream end of the market

I’ve been struggling with storage on my MacBook Pro all year and at the start of the year I removed my Windows BootCamp partition from the drive to save space, choosing instead to use a simple virtual machine rather than a partition. A couple of months later, that too was removed from the drive. Even MacKeeper and DaisyDisk couldn’t stop my drive from filling up so it’s time to take the plunge and order a fresh drive.

The choice at the moment in the 256GB segment is obvious. It has to be the Crucial M4, the successor to the C300 that I blogged about here. The M4 is a SATA 3 version of the SATA 2 C300 model. SATA 3 allows for twice as much bandwidth (which translates into speed) as SATA 2, 6Gbps versus 3Gbps, and the Crucial M4 sits very comfortably ahead of the pack on all the usual benchmark sites.

But what happens when you want to use an M4 in a machine that has only SATA 2 support, like my 2010 MacBook Pro? (The 2011 models with Thunderbolt ports have SATA 3 support).

To solve this question, I decided to film a video review. However the SD card in my video camera (a Transcend 16GB Class 10 SDHC card) decided to fail on me while downloading the video to my MacBook. Not only that, but these particular cards were recalled and LoveMemory didn’t pass on the recall notice. Thanks guys

. This means that there is no video review showing how to upgrade the HDD in a MacBook Pro and losing the startup and shutdown times too. 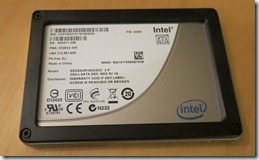 The Benchmarks (on SATA 2/II)

XBench 1.3 was used to benchmark both drives. The Intel drive had 10GB free (I made as much space as I could for the benchmark) and care was taken to reduce the number of tasks running at the same time as the benchmark tests.

The benchmarks results are presented in MB/s 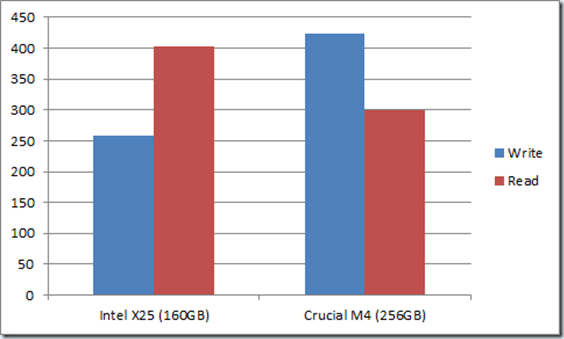 The Intel drive surprisingly shows a clear advantage in read speed and a larger disadvantage at writing. 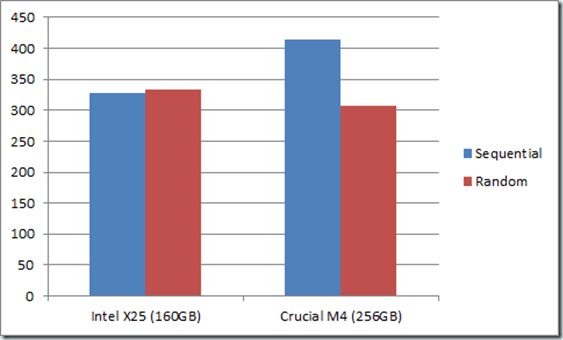 The Intel drive demonstrates remarkably consistent performance in both Sequential and Random read/write access tests. The Crucial M4 on the other hand seems optimised more for Sequential, rather than random access. This is a little surprising considering how solid state drives tend to prefer random over sequential access and perhaps this suggests that Crucial are attempting to redress the balance with a bias towards sequential access. 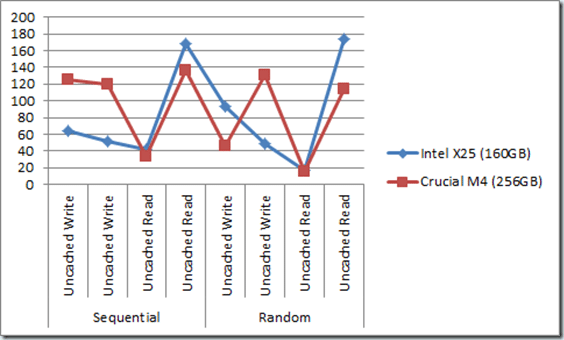 Clearly the Crucial M4 is handicapped by the SATA 2 bus and as we know it would blaze past the Intel X-25 if it were attached to a SATA 3 bus. Despite this, it still has a surprising advantage over the Intel SSD on write performance but the Intel wins out on read. Overall, the Crucial M4 is the better performer and is future proof, at least for the latest SATA generation and would make an excellent upgrade to an existing desktop or laptop or a blazingly fast upgrade to a brand new build.

Next post: This is what happens when a star explodes