Me, at the Berlin Wall 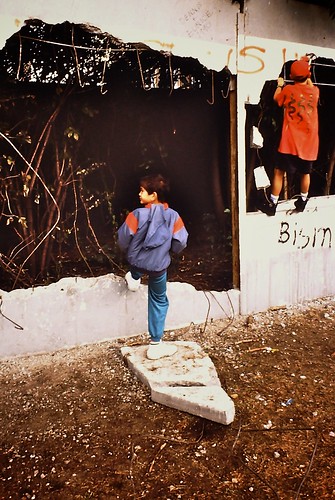 On November 9th the Berlin Wall fell and this eight year old Mike was there. My dad found this photo amongst a collection of old slides and as a thirty year old father of one, it brought back memories; we used to cross the wall (via Checkpoint Charlie) from West Germany into Soviet/Communist controlled East Germany.

East Germany was a terribly drab place and all my memories of East Germany are in black and white, much like the architecture and the depressed emotions of the locals. They were depressed of course – West Germany was modern and had all the money, jobs and freedoms the western world enjoyed. Those on the eastern side of the wall (some cut off from their families in the west) could see the relatively decadent and carefree lives of those on the west. The penalty for crossing the wall or attempting to flee East Germany? Death by sniper.

We of course went over to East Germany as military tourists (my dad would have to wear a full parade uniform for the duration of the trip — even on hot sunny days) and we would have to pass through a selection of checkpoints to show papers and have our belongings and vehicle inspected by dog-carrying, kalashnikov-wielding soviet soldiers.

Via Flickr:
This is me and I’m standing on pieces of the Berlin wall just a day or two after it fell on November 9th 1989. (I was eight years old).

Next post: What Apple didn’t tell you about the iPhone 4s