“Many a night I saw the Pleiads, rising through the mellow shade,
Glitter like a swarm of fire-flies tangled in a silver braid.”
– from “Locksley Hall” by Lord Tennyson 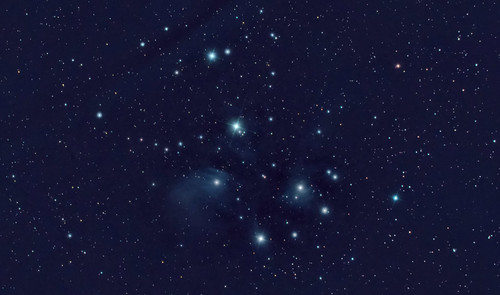 I wasn’t going to post this shot since there’s so much technically wrong with it (uncompensated-for amp glow, underexposed flats, poor alignment, insufficient data, light pollution gradients and coma), but it’s my favourite star cluster and worthwhile blogging the picture if only as a record

The Pleiades are a prominent group of stars, easily spotted in the northern hemisphere night sky. If you have keen vision you may be able to make out seven stars although the cluster contains over 1,000 confirmed stars. These stars are young, hot and blue and are travelling through a region of dust and gas which reflects the light from the blue stars giving us this faint blue wispy hue.

The name “Pleiades” comes from ancient Greek mythology and refers to the seven celestial sisters who all became mothers of various Gods.