A day with Sir Patrick Moore

I spent today with Patrick Moore (he told me not to call him ‘Sir’) and a few members of my local astronomy group  (HantsAstro – thank you to Bernie for organising the day and Patrick Moore for being an excellent host!). Patrick Moore has been described as a national treasure, a man with numerous lifetime achievements in broadcasting (longest running TV show ever), entertainment (numerous compositions and xylophone performances as well as once accompanying Einstein in an impromptu violin performance), a WWII RAF navigator and author to over twenty to thirty books, his most recent one just in the shops this month. A BAFTA winner with enough degrees, honours and fellowships to cover a wall, a knighthood and the first person to accurately map (by drawing) the moon (which the Russians used for their first moon space flights). Patrick has been presenting The Sky at Night on the BBC for the past 54 years and to think that I’ve been watching that show since I was a child and I’m ‘only’ 30 next month and his astronomical career started before my parents were even born…

Patrick Moore is an old school astronomer, a visual observer with some old and very beautiful (and still extremely high quality) telescopes. His PC runs Windows Vista and he still has his old Woodstock typewriter on his desk. I showed him my Apple iPad 2 with the custom (Gelaskins) astrophoto of the Pleiades on the back and he liked it

He even signed the front smart cover for me! 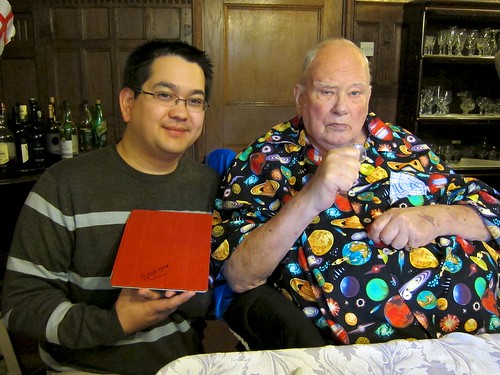 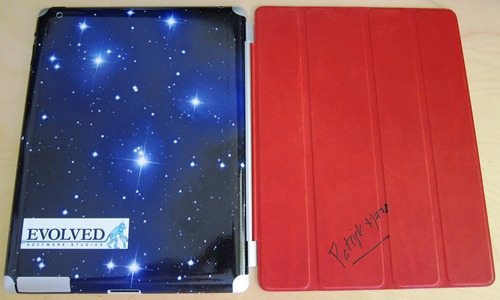 Although we came to observe the sun, the clouds blocked our view (it was pouring with the heaviest downpour I’ve seen so far this year). We went to take a look at some of his famous telescopes and equipment and then came back for lunch. He loves his cats very much and although his cats were hiding away during the day, he has an impressive enclosed “cat garden” and recommends that anybody else with cats, especially if living near a main road, does the same.

Patrick Moore was charming and intelligent, insightful and witty and welcoming and I hope that he had as much of a good day as we did!

Next post: Service will be resumed after the break…