Not something that you see every day 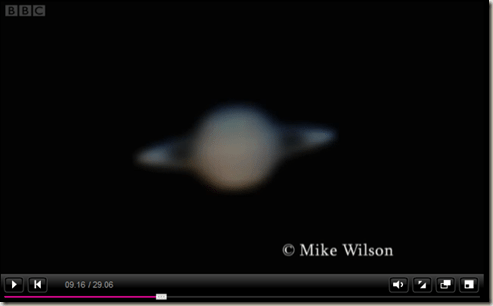 “Through a small 3” telescope, you can see Saturn and it’s rings. But it will look a little fuzzy. Nevertheless at a billion kilometres away that’s still a great view of this gas giant” – Dr Chris North.

Okay, so it was presented as an example of “a little fuzzy” through a 3” telescope

The telescope itself was a 6” but I had to reduce the aperture using a lens cap in order to lower the brightness of the planet as it was too bright for the camera as I didn’t have a neutral density filter to darken the image. Next time, I’ll try to get a filter to darken the planet and will try to make an image using the full aperture of the telescope.

I am absolutely thrilled to have my photograph presented on The Sky at Night, a programme that has intrigued me since I was a kid (it was even broadcast in Germany on the only English-speaking British Forces TV channel in the 1980’s) and it is the longest running programme with the same presenter in the history of television.

This episode (number 701) covers a star party in central London by a group of either crazy or tenacious astronomers called “The Baker Street Irregulars” and also Patrick Moore’s birthday party.