I’ve had ten nights so far in my astronomy-imaging hobby and I finally feel like my rig is getting there and I’m able to (given good weather) get some serious imaging done.

Last night was my “first light” test for a narrowband filter. As you probably know, white visible light is made up from a wide spectrum of colours. 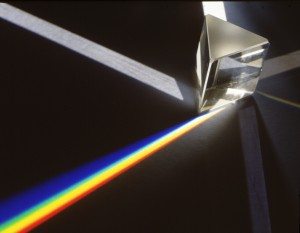 The visible part of light’s spectrum that our eyes can see runs from 380nm on the short end (violet) through to 750nm (red) on the long end. Blues are around 480nm, greens can be found at 580 and orange around 600nm.

When a Hydrogen atom is excited (e.g. by energy from a nearby star) it “ionises” and a photon of light is emitted with a precise wavelength of 656nm (a red colour). And since Nebula (gasous clouds in space) are primarily made from Hydrogen atoms, if we look only at the light in this tiny slither of the whole visual spectrum, we can isolate (or see) just the size and shape of the nebula and make other very interesting deep sky observations that reveal more particular detail than you would normally see if you recorded a photograph of the entire spectrum of visible light.

Using a 7nm (i.e. 656nm +/- 7nm) filter and passing 20 minutes worth of photons through it onto the sensor of a Canon EOS 1000D DSLR that has been specially modified for astrophotography, I produced my first narrowband astrophotograph: 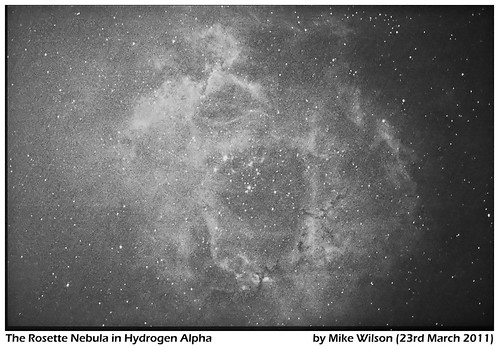 The Rosette Nebula is 65 lightyears across and 5,000 light years from us. If you wanted to see this visually, you’d need to be at a very dark site with a large aperture telescope and a wide angle eyepiece. The picture is black and white, but imagine you’re seeing it in a nice deep red.

I really wanted to capture the Rosette Nebula before it disappears until next Winter.

Near the Rosetta was the Horsehead and Flame Nebula – in order to test the software and hardware control for the mount was working correctly (CdC + EQMOD + EQDIR), I ordered the mount to slew directly to the target, then had the guide camera tracking and got the mounted 1000D to take a 278 second image. This is the result: 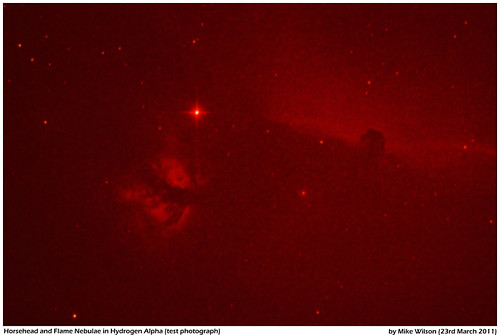 By this time the earth had rotated underneath my feet enough to cause our bamboo to obscure the Rosette, but in turn Saturn was rising over a nearby housing estate. This was my first proper eyeball view of Saturn and it was breathtaking. I defy anyone to not look at Saturn through a decent telescope for the first time and not hold one’s breath. You could easily see the rings (made from snowballs) and the Cassini division (the gap in the rings) and at least one moon. I didn’t have so much luck trying to record the view on a camera, but here it is: 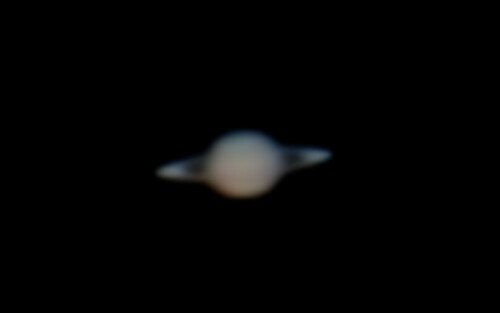 I then slewed the telescope over to M3, a compact ball of around a million mostly middle aged stars for this picture: 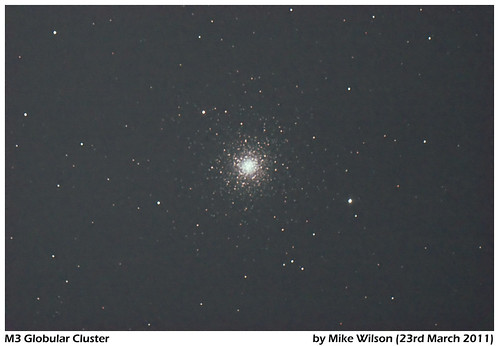 It was a good night overall. I had a few software hitches that cost me a couple of hours but fortunately there were no show stoppers.

At mightnight I held a mini Twitter competition and asked my followers if anyone would like me to photograph something in the night sky for them:

@MikeWTweets: “Pick any object in the constellation Hercules, Ursa Major, Leo or Bootes and I’ll image it for you. Offer stands for the next 30 mins!”

@theG57 responded with “NGC 5466” – a very faint globular cluster in the constellation of Bootes. I think I managed to acquire it but due to the dew forming on the secondary mirror of the main scope, I couldn’t capture any detail in the short time I had left.

Next post: Not something that you see every day