Capella. How many stars? 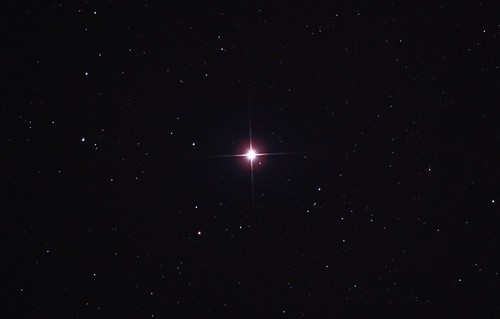 Capella. How many stars?, originally uploaded by MikeWPhotos.

It looks like a single star, but it isn’t; it’s four. Capella is the sixth brightest star in the sky (or third brightest sky if you live in the northern hemisphere).

Taken from Wikipedia: “Although it appears to be a single star to the naked eye, it is actually a star system of four stars in two binary pairs. The first pair consists of two bright, large type-G giant stars, both with a radius around 10 times the Sun’s, in close orbit around each other. These two stars are thought to be cooling and expanding on their way to becoming red giants. The second pair, around 10,000 astronomical units from the first, consists of two faint, small and relatively cool red dwarfs.[11][12] The Capella system is relatively close, at only 42.2 light-years (12.9 pc) from Earth”