Want to make $100,000 on the Android Marketplace without building a single application?

Take a look at the example of TUQSoft. They’re a small outfit (maybe one person) who decided that they could take screenshots of games and then sell those screenshots with a legitimate game’s icon and name for $0.99 a time on the Google Android Market, capitalising on the vast array of people who come looking for a game and accidentally purchase the wrong item…

Crucially those 5,000 to 10,000 people who ended up parting with $0.99 for what many of them thought was a game by a developer who should know better, and is potentially infringing on the intellectual property of the studios who make these games and is arguably costing the original studios’ money.

Whilst the developer here in question has a dozen applications screenshot bundles for sale, most have been downloaded around 10,000 times at a cost of $0.99 per download. That’s over $100,000 in revenue split between Google and the seller. Quite an incredibly return on the half-day it probably took to flood the Android Market with these wallpapers.

Good luck getting refunds on your android market purchase (you’re out of luck if you’ve had the wallpaper for more than 15 minutes as Google consider that a long enough duration from download to making a refund request). 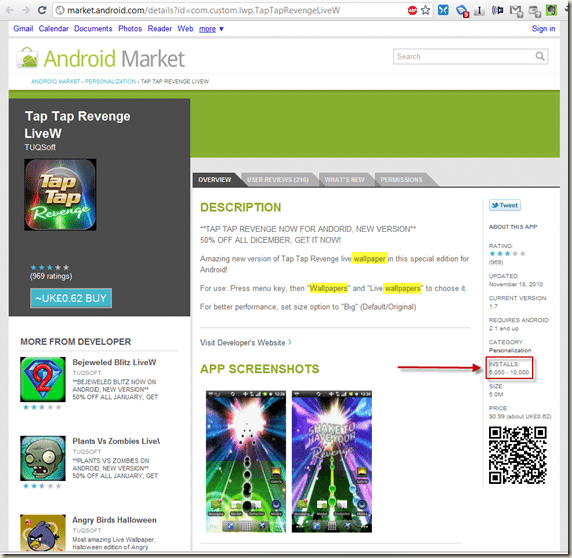 The latest three customer reviews speak for themselves:

I hate it there is …

I hate it there is no point of it.

Its a wallpaper not a …

Its Wallpaper, it sucks,its a …

Its Wallpaper, it sucks,its a scam they know but wont change it and wont refund you. Scanners.I guess we should read better and they should label clea

TUQSoft have twelve other ‘applications’ in the Android Market, which look like the the top most grossing games list on Apple’s App Store. The list includes Bejeweled, Plants vs. Zombies, Angry Birds, Modern Combat 2 and Super Mario. They even going so far as to “reuse” the original application’s icons: 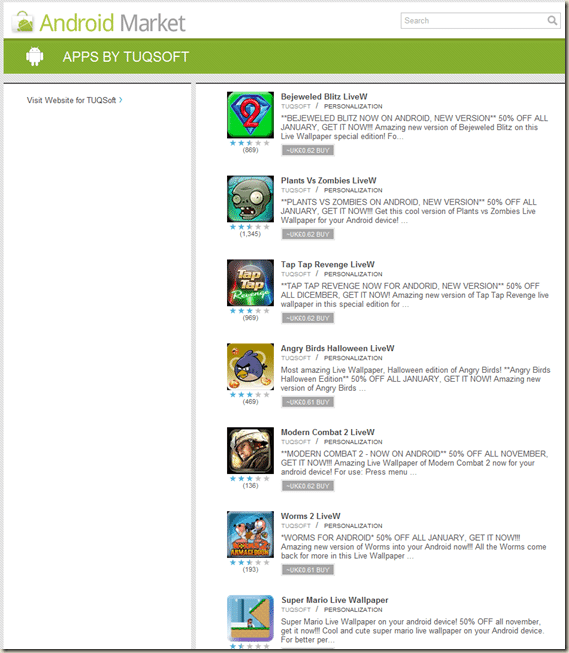 I find it rather surprising that someone can come along and literally off the back of other software developers’ hard work make in the region of one hundred thousand dollars and not have a response from Google?

Does Google not have a vetting policy for their application market?