Time to order a new SSD…

I’ve been trying to hold off ordering a replacement main boot drive for my desktop for a while now, at least until the next generation Sandforce (SF-2000) controller drives become available. However my little 64GB+64GB Samsung SSD RAID array is getting rather full and the performance of the drives is now faltering a little that I’ve had to bite the bullet.

I’ve ordered a new Corsair (Sandforce) 180GB drive which should hopefully tie me over until newer, faster or cheaper solid state drives are available (12-18 months).

My current twin SSD’s aren’t Sandforce and since they’re hidden from Windows behind the motherboard’s RAID controller there isn’t an TRIM garbage collection support. 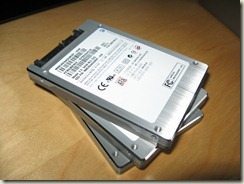 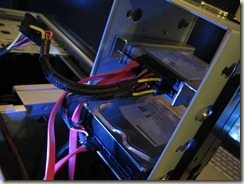 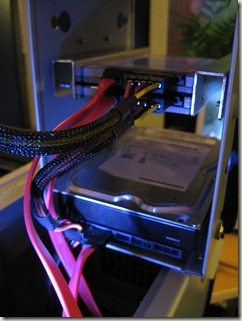 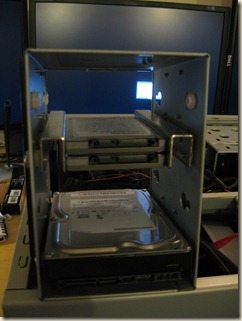 The replacement
I’m replacing the two 128GB RAID array with a single 180GB SSD. This one drive has over twice the read and twice the write performance of a single Samsung 64GB PB22-J (generation 2) drive (these Samsung drives are over 18 months old now). As soon as it arrives I’ll make an image of my Windows installation from my current twin drive array onto this drive.


High end SSD for desktops and laptops
These “C300” SSD’s are optimised for faster read speeds and slightly slower write speeds which give overall better real world performance. These are the best current generation SSD technology for the average user and those building SSD RAID arrays.


Recommended mid-size SSD replacements for desktops and laptops:
These drives use the same Sandforce SSD technology, have higher write speeds and also support Windows TRIM (a method to maintain drive performance) as the above drives. However they don’t have their own internal garbage collection so you’d want to use these on their own and not through a RAID controller.

OCZ Vertex 2 or Corsair Force are available in a large selection of sizes at all prices.


Looking for a drive for JUST your operating system?
Pick up any Sandforce 30GB or 60GB SSD and you’ll be completely happy. At least until Windows fills it with temporary files

What about the Intel X25?
I have previously recommended Intel’s rather amazing generation 2 SSD in both 80GB and 160GB flavours and I have a 160GB Intel X2 SSD in my own 15” Macbook Pro and have installed several in customer’s laptops. However the Intel X2 uses an older controller that while is still blisteringly fast, isn’t quite up to the read and write speeds of the Sandforce controller. Therefore they should now be considered obsolete for a new purchase but a worthy second hand purchase if you can find one…

What about Hybrid drives?
Hybrid drives are usually 3.5” drives that combine typical spinning magnetic disks with a little bit of flash storage (usually 4GB). Initial reviews suggest that they do well to optimise Windows boot times to WD Raptor beating times (this is good). However they are not solid state and therefore have easily damaged and relatively slow moving parts so aren’t ideally suited for laptops (compared to SSD). However if you’re getting a laptop and have the option for a hybrid drive where otherwise you’d have gone for a traditional mechanical drive, go for it!

Next post: Want to make $100,000 on the Android Marketplace without building a single application?