The TSA chose Meg McLain for special screening. They wanted her to go through the new porno-scanners. When she opted out, TSA agents raised an enormous ruckus. When she asked some question about what they planned to do to her, they flipped out. TSA agents yelled at her, handcuffed her to a chair, ripped up her ticket, called in 12 local Miami cops and finally escorted her out of the airport. Listen to her story as she told it on radio show Free Talk Live last night. Things are truly getting scary

It appears that the TSA have a public affairs office and in an attempt to discredit the travelling girls testimony, they published the CCTV video to their YouTube channel. I watched it and was pretty shocked at the treatment this girl – and to a lesser extent, the entire travelling public received at this particular checkpoint.

I would have no issues with going through a full body scanner (it’s not as if images are saved and tweeted shortly thereafter) although I respect the wishes for those who don’t. Surely those who do not wish to go through the “Porno-scanner” should be allowed in some other way to demonstrate their innocence (perhaps via a pat-down).

Somewhat foul intent was obvious as this TSA channel has chosen not only to moderate their YouTube channel comments but – and this is totally disgusting – they have allowed one negative comment (which includes the line, “Eff this stupid girl”) to be published on the video! Needless to say, forcing comments to approval only and then only allowing through ‘favourable’ comments or comments that attack your opponents position is just low… 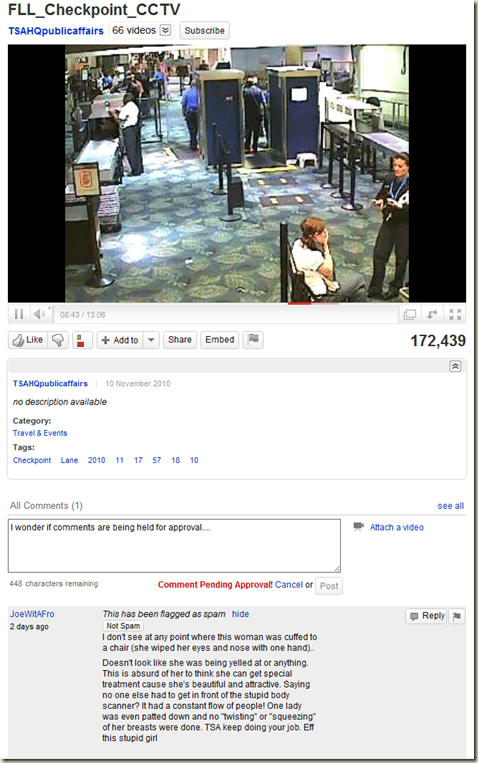