For the past four days I have been at Kelling Heath, Norfolk, camping. Holidaying with my family by day and moonlighting as an astronomer at night! I was staying with some other astronomers (a diverse mixture of friends; the moderators of the popular Stargazers Lounge internet forum (SGL); and First Light Optics, an astro-retailer) and I am thankful to the SGL admin staff who invited me along to stay with them (thank you very much!).

Kelling Heath was a fantastic campsite. It hardly qualifies as a camp site at all; it reminds me of a cross between Centre Parcs, Bill Oddie and David Bellamy’s  back garden, Bird World,  and “The Others” village from Lost. It’s a camp site with everything. One could live here quite easily as long as a mobile phone signal isn’t wanted or needed… (this explains my extended digital absence). 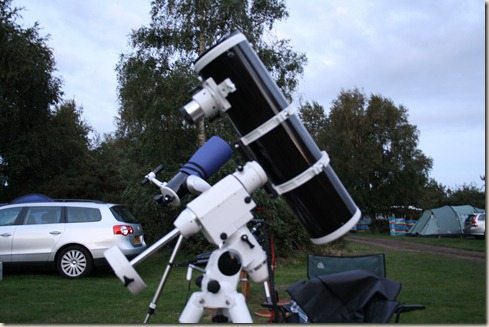 The trouble with finding your way around the stars (and imaging them) on a standard left/right/up/down mount (called an “Altitude Azimuth” or “Alt-Az”) is that they are affected by the apparent rotation of the stars about the earth’s north celestial pole axis. The planet spins and whilst the telescope can still point at an object, that object will be rotating in the field of view. This is especially noticeable when taking photographs of the night sky with long shutter speeds as the stars will appear to leave a ‘trail’: 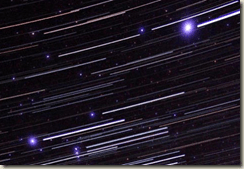 Astronomers can compensate for the rotation of the earth by using an “Equatorial Mount”.The white mount in the picture is one such mount. Instead of turning left/right and up/down like an “Alt-Az” camera-tripod style mount, this mount requires aligning to the earth’s pole such that it can rotate with the earth’s axis and therefore allow more advanced observing and astrophotography since the field doesn’t rotate.

Needless to say, setting up this mount for the first time was incredibly frustrating and aligning it was near impossible since the internal polar scope (the tool used to align the mount correctly) wasn’t working.

With a little help from some friends, who aligned the mount for me and got me up to speed (thanks Steve’s Astro & Ant Emberson!), I managed to get enough data to generate the following images of some deep sky objects, starting with The Dumbbell Nebula – a planetary nebula in the Vulpecula constellation. 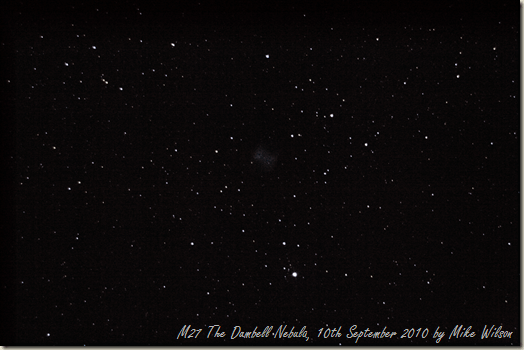 Factoid #1: The light recorded in this image had been travelling for approximately 1,360 years. In other words, this is the Dumbbell nebulae exactly as it would have looked in the year that the first Chinese paper money was issued and when the Hindu empire rose to power in Sumatra in AD 650… 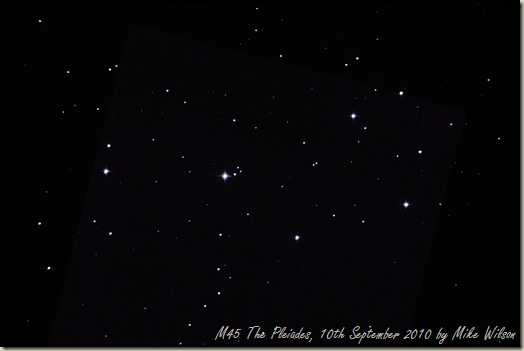 Factoid #2: The Pleiades make a good eyesight test. You can see this star cluster without a telescope although the older you are, the less stars you will be able to see!

And finally, just before the clouds rolled in I wanted to capture a few subs (photos) of the great Andromeda Galaxy. I missed and got this galaxy pair (there are at least two galaxies in this image) instead: 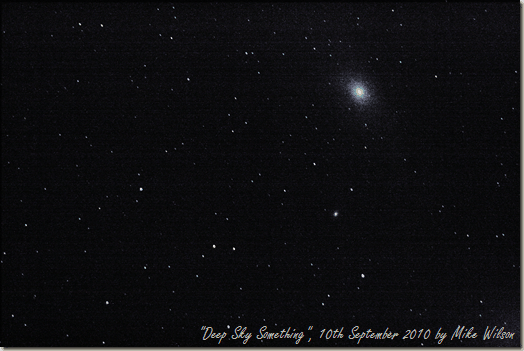 If you know what this object is, please let me know!

Some astronomers call “imaging” the “dark side”. I’m enjoying it so far and until another clear night presents itself, I’m going to see if I can get the data in these images processed more clearly.