This fun piece of news from modmyi.com arrived in my Google Reader subscriptions inbox today which starts out with the line, “I’m not sure how Apple is going to feel about [our actor jailbreaking his iPhone] this”. I try to watch the video in question only to find it gone, pulled from YouTube – by a DMCA claim by Disney!

And who is Disney’s largest shareholder? 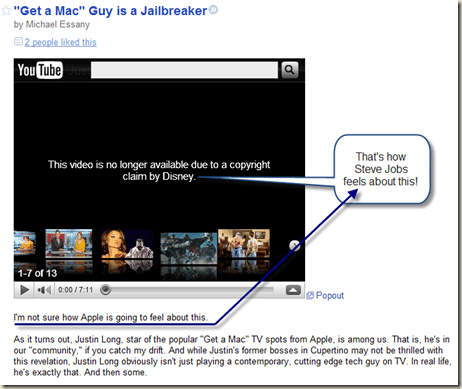 It appears that the copyright claim was filed under the auspices of Steve Jobs with Disney as a proxy.It’s hard to know for sure if the content of the video constitutes ‘fair use’ but these critical videos usually do and it’s fair to say that businesses such as Disney, Hulu, Viacom, etc, have been known to use the DMCA (rightfully or wrongly) to attempt to remove content critical of their businesses and practices from the internet.

The internet responds badly to such use of power, so you can expect to see hundreds of mirrors of the original video around the blogosphere and hosted in a non-copyright enforcing country near you shortly.

Previous post: How to get a 15% discount at the Apple online store from your own home (you’ve got to be a student though).