I’ve just returned from the last three days of Salisbury Star Party 2010 and it was absolutely brilliant. We met some great, helpful, friendly and fun people and saw some stunning views of the night sky from our humble place in the Cosmos.

The first night was completely overcast, so we planned to take a walk around the campsite to chat to a few more experienced astronomers. This didn’t happen since other chatty astronomers came to us and we found ourselves drinking beer, tea and coffee into the early hours (3am+ !) and observing nothing. If anything, astronomy under British skies teaches a hard lesson in patience. 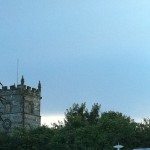 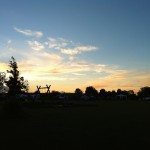 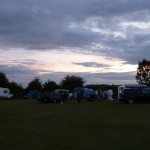 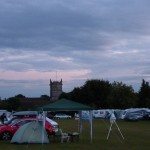 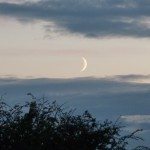 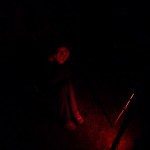 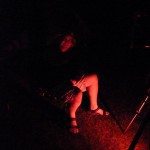 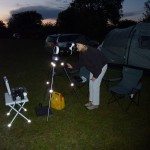 I met a bunch of great people in the dark and shared some fun stories. I’d be hard pressed to recognise anyone’s face during the day as from a dark site with no white light sources, you can’t see much. In fact, a late night trip to the loo almost had me walking straight into someone’s tent!

On the second night the skies were clear before going as overcast as the first night. However at 10 O’Clock the skies parted and we were treated to the most amazing view of the Cosmos. The Milky way stretched across the sky and I saw a couple of amazing meteors. Imagine holding a flaming garden pea at arms length and throwing it and you’ll get the idea. One meteor flew overhead followed by a ‘whooshing’ sound like a rocket or a missile; I do hope it burned up and used up all its kinetic energy or someone may have had a bad day with that landing on or near them!

Vicky saw Venus at dusk (in the same phase with the moon) and Jupiter at night and despite some technical problems with my scope’s motor power supply, we saw the Andromeda Galaxy. Considering our galaxy contains over a billion stars (our sun being one of them) and the Andromeda Galaxy is far bigger than our own galaxy; and that there are billions of galaxies in the known universe – it’s a humbling experience that frames life from a Cosmic perspective.

We had a hog roast that evening too, which was a nice touch 🙂

Also that night a bunch of non-astronomer teenage campers and their parents decided to walk through the field with a zillion-candlepower white torch (which can ruin observing at a dark site). They came right up to me and started asking questions about why we were all here on a campsite with telescopes. I had a good discussion with them about the Cosmos and found myself playing the role of impromptu science educator, explaining to them first what a planet was, then what a solar system is and finally how far away in space (and TIME) these distant objects in the sky are. Unfortunately by this point dew was setting in and I was blowdrying my scope, much to their amusement (“Your scope needs to go the hair-dressers!”, etc). The dew did finally call the shots and my first and only dark sky observing experience was over all too soon, at 1:30am.

If you want to learn more about astronomy or the Salisbury Star Party 2010, some media outlets were there to catch the news (mostly interested in the Perseid meteor shower). BBC Sky at Night magazine recorded a vodcast (available on iTunes) on Friday and GMTV on Thursday recorded nothing as the camera man didn’t bring his wide angle lens and they couldn’t film anything interesting in the dark otherwise! That’s a real shame in my opinion since whenever I’ve seen GMTV it always seems to be on a topic such as body hair, female weight loss, soap operas or the like. It would have been a real opportunity to have some entertaining and interesting content. An opportunity totally missed by ITV! I’ll update this post with links to recordings from the various TV/Radio spots when/if they’re available for download.

Thanks for a great Salisbury Star Party, fingers crossed, we’ll go for a little longer next year!

Next post: How to get a 15% discount at the Apple online store from your own home (you’ve got to be a student though).