Who has the best mobile network?

The iPhone 4 is available for pre-order tomorrow lunchtime (UK) and all five of the major UK networks are vying for your business. At the time of writing only O2 and Vodafone have published some of their pricing information (the rest should follow over the next 24 hours). However outside of price, which network should you choose for your 3G phone or mobile broadband?

Both Orange and Three make the mutually exclusive claims that they alone have the UK’s biggest 3G network. The claims are generally upheld by last year’s OFCOM survey which shows both Orange and Three have by far the widest 3G coverage of the UK. Vodafone claim that they alone are the most reliable network; their front page shows an image of a seemingly distressed young woman making an emergency call at the wheel of her car. I can’t say I like Vodafone’s marketing strategy much, but I use one of their PAYG mobile broadband SIM cards in my MiFi and Vodafone easily provides a signal anywhere my iPhone on O2 can and even gets a good signal where O2 doesn’t. The countryside is still typically a black spot for all operators, especially in my experience, O2 and Vodafone. 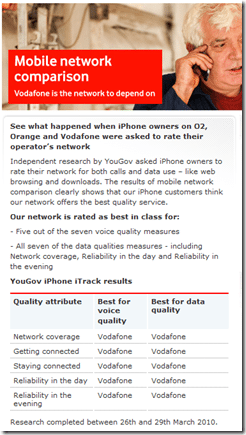 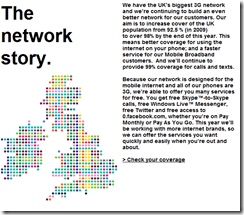 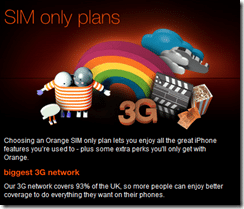 Probably the only unbiased 3G coverage survey ever undertaken in the UK. It generally maps what the areas that the individual networks say they cover but does suggest that Orange and Three have the widest 3G net and that O2 have some way to catch up. Coverage doesn’t imply a good quality connection – which could be contended with a larger number of users. Generally online reviews have praised Three and Vodafone for consistent bandwidth although I have yet to see a good test of the UK networks outside of the main cities. 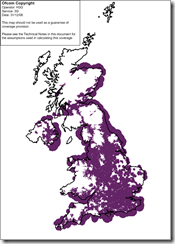 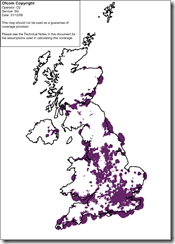 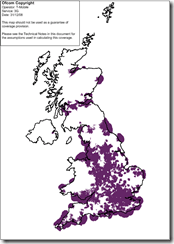 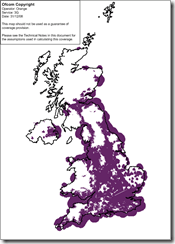 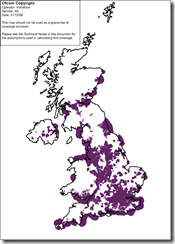 Check your own coverage

I’ve been generally happy with O2 so far although there are some black spots – unfortunately these include a few of my clients and also some nice places in the country I like to go for a break. Generally O2 works very well in towns and cities but you will start to lose 3G whenever you go near trees.

Entering the postcodes of ten of my favourite locations (a variety of city, town and country locations) into each of the mobile networks and rating the results from one star to four where four is a full 3G signal indoors and one star is variable voice or variable EDGE, the networks scored the following:

Therefore, I’m probably going to take a jump to one of the other networks – assuming the pricing and availability is acceptable!