Is your wireless connection dropping constantly?

It was back in 2002 when I got my first wireless router. Wireless routers were in their infancy and hardly anyone had broadband never mind the awesomeness of now ubiquitous wireless broadband. Eight years ago I was newly married and renting a two bedroom flat in a new housing estate in Aldershot, working the day away as a software developer for a legal software company.

Ah, those were the days when “polyphonic” ringtones sold mobile phones and few people had a car with satellite navigation in it. If you felt adventurous (or masochistic) you could connect your archaic Windows 2000 laptop to your Nokia brick phone and just maybe, for a brief moment, you could send and receive email. For those interested, I had a Palm M505 PDA at the time and I was using a NavMan GPS with it for in car satnav before it became a must have accessory!

Back in 2002, wireless networking technology was new and it seemed like nobody knew how to use it. In those days if you needed internet access on the road, you could pull into any well off neighbourhood and ‘borrow’ some bandwidth from somebody’s unsecured wireless network.

Nowadays, one can even get an internet connection in remote areas with the help of best satellite internet options available in the region. That said, wireless networking technology has been with us for an age (in technology terms at least two ice ages) and still nobody seems to know how to use it. It is practically impossible to get around any suburban area without seeing at least one wireless SKY box and two BTHomeHubs advertising themselves across the air waves. Fortunately people have become wise to protecting their wireless networks with encryption although vendors still insist on shipping boxes with default passwords of ‘password’ so those still inclined to wardrive on the go, still can.

My wireless network problems started last week when I noticed that I could barely access my own network for more than two minutes before the connection dropped. This would occur from my office as well as my bedroom (I work at home and the same network covers the whole house) and I was more than puzzled to see the same problem on every device even after resetting the router multiple times. It was almost as if there was ‘noise’ on the line.

I downloaded a free trial of AirRadar (for Mac OS although there’s probably something else out there for Windows) which is a wireless network scanner that scans for networks and displays their current, average and maximum signal strength (so you can see noise on the signal) as well as the channel of the network. To my surprise I saw eight wireless networks in range from my office and five of them (including mine) were all on the same channel.

Wi-Fi works on the 2.4 Ghz band but splits this frequency further into 13 subchannels (or channels) which are 22 Mhz wide and spaced 5 Mhz apart. This means that networks potentially interfere with each other within a five channel radius and channels 1, 6 and 11 never interfere with each other. Clearly having five networks all working on channel 6 at (2.437Ghz) there is going to be a heck of a lot of interference so moving my network to a different channel will probably help out my neighbours too! 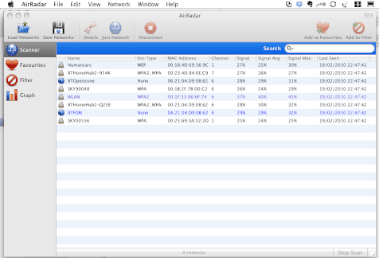 Incidentally, when I configured my network I chose channel 6 instead of the default 11 (every router I have ever configured has always used 11 as the default – I don’t know why) so that I would never overlap with any new router installed on default settings. I’ve gone with channel 9 instead of 11 just in case another router in the area starts up on channel 11.

This does make me wonder how other people resolve this problem when there isn’t an obvious alternative channel to use, for example those in tightly knit blocks of flats or a dozen businesses sharing a building. Or indeed looking to the future when we all carry around our personal wireless network and a dozen mobile devices all broadcasting on different channels could interfere with any Wi-Fi network. I know 2011-2012 will bring about 802.11z to af which should address some of these points but 802.11g is the predominant standard and it will be around for a long time yet. Network congestion will probably happen in your neighbourhood and you heard it here first!

So, if you are having poor performance or outright disconnections on your wireless network, do check to see if your neighbours are interfering with your signal. If you live in a high population area, it might be a nice idea to do the neighbourly thing and agree amongst all the residents who uses what channel and stick to it so that you’re not interfering with each other’s networks!

Have you encountered any problems with your wireless network or with interference? I’d love to hear from you. Type your thoughts in the comment box below 🙂