Why pay twice as much for a Macbook when you have have a secret 50% “marketing discount” off a Windows laptop instead? 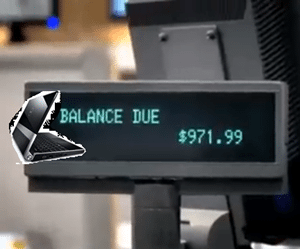 Each time the “Laptop Hunter” ends up with a lemon laptop which is in no way comparable to the more expensive Apple machines. However this video has the lucky law student turning down an Apple Macbook, choosing instead Dell’s high end Studio XPS 13 and paying £635 for it.

The objection to Apple in this video was, “This Mac is $1999 and that’s before adding anything. Why would you pay twice the price?”. I would like to argue that the Windows machine was heavily discounted for this advert and that the price shown on the till is not available even to the trade. If true, this would make a mockery of the claim, “Why would you pay twice as much [for a Macbook]”.

The chosen Dell Studio XPS 13 is an excellent machine in general (assuming the user has the technical ability to update the BIOS and drivers regularly). It is the refreshed and improved version of Dell’s previous laptop, the Dell XPS M1330 that I reviewed earlier. Apple are renowned for producing good quality hardware along with their own software to match and supporting the whole bundle with genius bars in Apple stores giving a generally good ownership experience, but it costs more. Apple is a more expensive but arguably preferable solution to having your laptop glued together somewhere cheap and offshore using materials that can’t withstand high temperatures and whose screen blocks the exhaust vent when opened.

The Apple versus Microsoft debate rages on and nearly everyone has an opinion. If you’re a fan of one company or the other please leave your comments below!

Each episode runs for 60 seconds and follows the same format. After a brief introduction to our characters we learn of their requirements. Lauren is after a responsive machine that is portable with good battery life. In the middle of every clip the music turns sour for 10 seconds whilst the actors pull faces and make some generalisations about the Apple offering before marching back to the Windows laptops, choosing one and ending the clip with a smile and a fistful of cash which further reinforces the negative stereotype that Apple hardware is expensive.

It is however misleading if, during the clip you make a comparison to a laptop that isn’t in your price range. For instance, the other lady in the advert (Lauren’s mum?) asks Lauren “Why would you pay twice as much?” and the camera moves to this shot of the twice-as-expensive price tag of an Apple laptop: 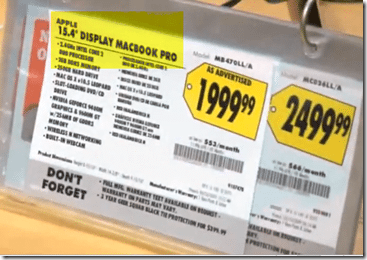 Two and a half thousand dollars? Ouch. Only the biggest number on the screen is covered over and the advert doesn’t say (I suspect it’s for the mid-high end Macbook Pro). What the advert does show is the price tag for a Macbook Pro. This is EXACTLY the same as shopping for a small family hatchback and comparing the price with a competitors luxury saloon car.

It’s fair to say that this really is comparing Apples with Oranges as the laptop shown on the ticket is a 15.4” Macbook Pro, a much more expensive machine than the class competing 13” Macbook. Dell do have powerful laptops sporting 15”, 16” and 17” displays, but obviously costing a lot more. Moreover the new “Dell Adamo” high end laptop (cut out of aluminium no less) starts at $1799, which would break Lauren’s budget. Lauren isn’t in the market for a Macbook Pro as she already stated that she wanted portability as an important factor in her choice. Would it be fair for Apple to compare their “cheaper” Macbook against the “Twice as much” Dell Adamo? No. I didn’t think so.

What they should have shown was a comparison to the Apple products in the same 13” portable class as the Dell XPS, the Macbook:

Which makes me wonder why she only spent “$972” for a low end XPS 13 (the only one they had in stock) when she could have taken an order for a high end XPS from another store and still been $300 under budget.

My chat with Dell sales

I’m not a law student looking for a laptop to take away, but I am a certified technology nomad and a long time Dell customer. I’m also not purchasing from PC World or Best Buy so there’s no 30%+ retailer mark-up. Do you think that I could buy a laptop like Lauren’s for a similar price that she did? 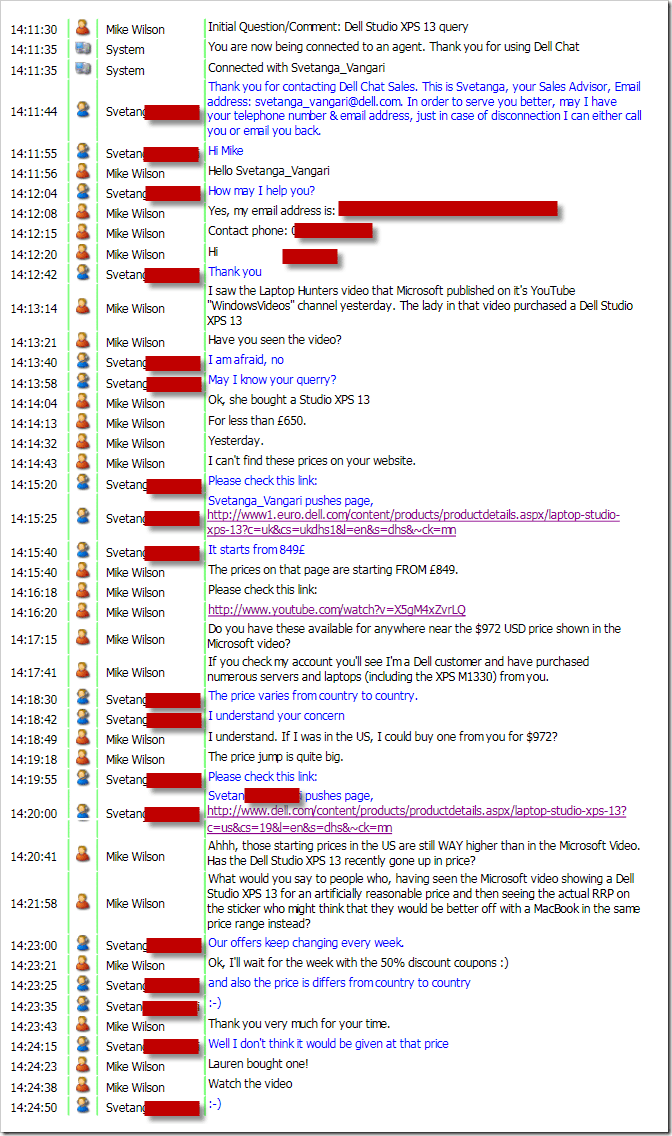 So there’s your answer. If you want a Dell Studio XPS 13, you’ll have to pay Apple money for it. And if you’re in the market for an Apple Macbook and you’re a student, why not make a proper evaluation of her needs and pick the machine that’s best for her within her budget?

Apple don’t specify the model of Intel CPU, stating only “2.0 ghz” which means it’s probably a Santa Rosa generation T7300 or similar CPU. The Macbook also uses DDR2 RAM (a clue to the slower bus speed), compared with the XPS using the latest Intel CPU’s, DDR3 RAM and (if you go one model up, twice as much of it). The XPS has double the disk capacity of the Macbook and both have the same nVidia 9400 mobile GPU. (I hope the XPS’ GPU is glued on properly this time).

However, the Dell comes with Vista which is as slow as molasses and the Apple with the much better optimised OS X. Windows 7 should be available later this year which should tip the advantage over to the Dell but for the purposes of “doing programs fast”, both machines are more or less equal in this regard.

The Apple Macbook is the winner on size and weight. If you go for the mid or high end Macbook (both in Lauren’s price range) you get the Aluminium unibody which is a single piece of aluminium giving unparalleled rigidity.

Just like car fuel economy figures, nobody ever gets the advertised battery life. Dell’s published battery life figures are based on the laptop running from a full battery with radio (WiFi, bluetooth, etc) turned off and the screen brightness turned down and being idle (i.e. doing nothing). Full brightness on battery (e.g. working outside) yields just one hour on the standard six-cell battery.

Generally speaking, a quick internet search will yield more real life information on both machines. With the XPS you can expect to get over 3 hours running idly, around 2 hours of general internet browsing and under 2 hours for watching a DVD on battery power alone. The Macbook averages around 5 hours for these tasks. Since Lauren intends to use her laptop at university it’s going to need to be able to survive two lectures a day plus time in the library. The Dell has bigger 9 cell batteries available but at added cost and weight, so the Macbook wins on battery life.

The Macbook is $100 cheaper than the XPS, so the Macbook wins here too.

The Dell has a backlit keyboard (and so does the Macbook if you get the $1,599 or higher version). The Apple has an Aluminium unibody (at $1,299 or higher). The Dell has an aluminium body, leather accents and is generally reported as being well built, aside from the monitor as when opened, it blocks the hot air vent.

The Macbook wins 3/4 of the categories chosen by Lauren so why didn’t she purchase a Macbook? My criteria are different and the way in which I work is different, so I’d have gone for one of the Dell Studio XPS 13 variants. However, I did contact Dell and attempted to purchase a Dell Studio XPS 13, and the salesperson couldn’t do anywhere near that price for me. For this advert to be accurate, Lauren should have had the choice between the Macbook and something cheaper, but definitely NOT an XPS on price.

I find it disgraceful that Microsoft (or the advertising agency that was appointed by Microsoft) would be so incredibly misleading. It’s not an accident that they make a comparison to a high ticket price Apple item that is completely out of context for Lauren’s requirements in this video. Apple aren’t even the most expensive laptops in the mid size range either. In the high price enthusiast segment there are plenty of laptops (take the Dell XPS M1770 for example) that would make the Macbook Pro price tag look quite good value.

As a software developer, I’m really dissapointed that Microsoft dropped the ball by failing to advertise any software in these videos. Running Windows Vista has numerous benefits over OS X (such as the wider variety of third party software, Readyboost, Media Centre / Media sharing), but instead they have fallen into selling someone elses’ hardware and pretending it’s part of the “Windows” experience.

If Microsoft want to play the “good value for money” angle, why not show some innovative Microsoft (or third party) software running on Windows, perhaps demonstrating how to do more cool stuff, with less expense. Perhaps demo Windows Movie Maker and Windows Live? After all it’s bundled with Windows unlike Apple who insist on making you pay for everything!

In closing, let’s remind ourselves of how Microsoft used to sell their software:

Next post: Screen space: You can never have enough.