I remember a time before the web when networked computers were something only “big” corporations had, and multiplayer gaming was accomplished by stripping serial cables, reversing some of the wires and taking all afternoon to figure out why I couldn’t get “a connection”. A couple of years later and the first graphical web browsers were giving us snippets of information from across the world. Images would be shown tantalisingly rendered in lines a few centimetres at a time. Fast forward past Microsoft and Netscape’s battles and we’re into a whole new world of web browsers. There are dozens to choose from, but which should I choose for my own default browser?

On the system I’m using now, I have four web browsers and I use all of them for different things. Firefox is my main browser as it has all the addons that make my life easier, however it’s noticeably slow so Google Chrome is my system primary browser as it’s fast. I have Internet Explorer hanging around for compatibility testing and recently, Safari 4.0.

Until today I didn’t realise it was possible to benchmark these browsers on your own system. But thanks to the guys and girls at Futuremark, their new online-only product “Peacekeeper” benchmarks browsers: http://service.futuremark.com/peacekeeper 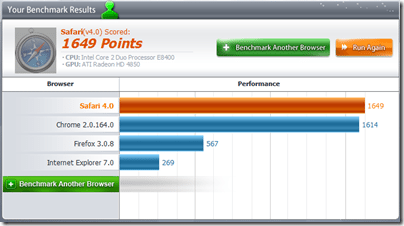 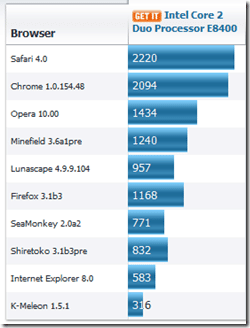 Safari and Chrome are built upon the same “Webkit” engine and it’s important to note that Chrome version 2 (developer only version) uses more of the Webkit engine than it did before. Chrome still holds the record for being the fastest browser benchmarked so far and Safari is very close. Most interestingly, why is Firefox performing so badly and Microsoft’s new Internet Explorer 8.0 performing even worse?

Previous post: O2 Mobile Broadband: Microsoft’s UAC is there for a reason.