Google Checkout to increases its fees 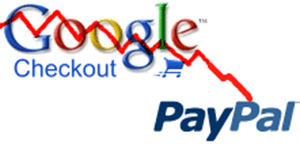 I just received an unexpected email from my favourite payment processor, Google Checkout. It’s a rather interesting announcement that in around six weeks their fees are increasing. They’re increasing quite a bit too; users who charge less than £1,500 per month are going to find the fees more than double. Users who charge £15,000 to £54999.99 each month but whose customers originate from a different country (so that’s a UK company selling to a US individual or organisation) are going to see a double increase in fees.

Ok, so what’s the big deal? First a spot of history.

Google Checkout’s release in the summer of 2006 was epic. They offered some of the lowest payment processing fees in the industry, a very simple and convenient checkout which can be as straightforward as a button on a webpage through to integration into almost all the popular eCommerce systems. Google offered everyone who advertised with them a discount on their fees too. It’s little wonder than EBay, the company who own the rival payment processor PayPal, saw their shares drop 7% when Google Checkout came out. This might have been due to rumours about a Google auction site but largely this was the result of an efficient, trusted payment processor.

What they’re changing to

It’s not rocket science to realise that this will effect, for the worse, the bottom line of every business that processes sales via Google Checkout – effectively squashing the gross profit margin on each sale by up 1.9% or more if you are an existing Google Adwords customer.

So let’s move to the competition, then?

When Google decided to re-price their services they must have taken a sheet of tracing paper to PayPal’s website, since the transaction costs are almost exactly the same. PayPal don’t do the sucky secret additional 1% on international sales though. There is no material advantage for using one payment processor over the other. PayPal has a more complex system that takes longer to get set up with and PayPal also have a history of terrible customer service so I’m unlikely to make a protest of the existing Google Checkout price hike by moving to PayPal. On the other hand what I may as well do is now offer PayPal alongside Google Checkout.

If Joe’s ISV Limited is a UK based company that sells mostly (assuming all) to the US, the costs start to become a more prohibitive £68.80 per month instead of £30.00. His product will need to be priced at £15.55 to take the hit.

Mrs Sterling offers a hairdressing service where people can book online and pay via Google Checkout. Each booking costs £20. She sells around 25 per week, making a monthly gross profit after Google of £1955. Under Google’s new system this would be reduced to £1912, costing her an additional £43 per month (or £516 per year).

Under my financial assumptions for these scenarios I am assuming (correctly) that Google Checkout and PayPal will levy their charges on the VAT portion of the sale. And since you cannot pass VAT charges onto HMRC or the EU, the non-VAT portion of the software price needs to increase much further than the charge rate, making the situation even worse. In my own situation, the cost of selling a CIS Solver license online will increase from £6 per licence sold to £14 per licence sold. Thanks for the warning, Google!

I suspect that those businesses who currently offer Google Checkout and who sell to consumers will likely also offer the more popular consumer-friendly PayPal format, perhaps even dropping Google Checkout altogether in favour of other payment processors who are now much more competitive, such as Worldpay or one of the (for software companies) US-based payment processors.

Will this pricing strategy affect you? Please let me know with your comments below.