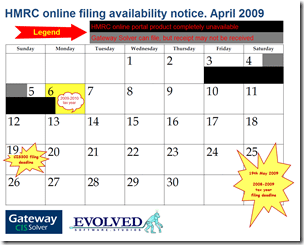 We have received early word from our contacts at HM Revenue & Customs that their own web filing product (the HMRC online portal) will be unavailable for the first weekend in April (3rd to the 6th). Third party software such as ours will are expected to work throughout this period although for 24 hours at the weekend will not return an immediate delivery receipt.

I have prepared a helpful wall-chart to advise you of the PAYE end of year and CIS end of month filing deadlines which you can print as a helpful reminder of the deadline dates and downtime dates.

We highly recommend that our customers file as soon as they possibly can within each tax period and avoid the busy peak times around the 5th and 6th of April.

Although last year, we had one customer filing on Christmas day which is probably taking the whole off-peak idea a little too far 😉

The following comes to us directly from HMRC (although this information is still subject to HMRC rubber-stamping approval and will be confirmed on Monday 27th March):

What HMRC say: “For all complete End of year (EOY) submissions HMRC portal users will be unable to access the service for the period between 06:00 3rd April and 06:00 6th April. During this period it is expected that third party customers will be able to file their live submissions and (subject to confirmation) will receive responses to their submissions as normal. The only exception to this is a 24 hour period from 12:00 4th April until 12:00 on 5th April where third party users will still be able to send their Return, but will not get a response until the end of the period. (If traffic is high during this period there may be an additional delay to response messages until the backlog has cleared.) Anyone choosing to file during this period must not attempt to re-submit their Return, because they did not get an acceptance or rejection message.”

– What we say: Please avoid the periods marked on the provided chart.

What HMRC say: “For all End of Year (EOY) submissions sent in parts From 6th April every year HMRC store online Returns and manage the build-up to full processing. This period has traditionally been 10 days to two weeks. This means that employers will not get an immediate Internet acceptance message where the P35 is sent separately from the P14s. Messages will be sent straight away once HMRC are processing at full capacity. This does not affect complete Returns or submissions containing only P14s.”

– What we say: PAYE Solver customers using the EasyBuild interface should note that the P35 and P14 reporting facility reports both the P35 and the P14 together, thus avoiding the delays associated with transmission of separate P35 and P14 forms.

What HMRC say: “Where the P14s and P35 are sent separately HMRC only send a success or fail message once all the parts have been consolidated and the whole Return checked against the Quality Standard. For this reason HMRC strongly recommend that employer’s send the P35 as the last part. This will prevent excessive polling for the P35 response.”

– What we say: We don’t send separate P14’s (at the moment), so if you use our software you don’t have to worry about this.

“Important note: “This information is subject to approval however, we will be able to provide confirmation in our next notification email to developers 5 working days before the April 2009 release.”