Look what I found on the T-Mobile website earlier: A Google Android G1 emulator. 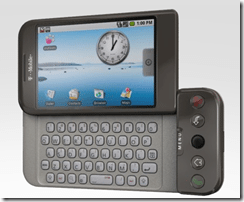 The emulator isn’t fully functional, but looks like it is a very close approximation of the Google G1 end user experience. The built-in Google services for search, mapping and basic email and contact management looks good but it leaves me confused as there are quite a lot of “missing” features conspicuous by their absence.

It’s missing Exchange integration (for immediate desktop-speed push email, contacts and calendar), a standard headphone jack, video recording and also the ability to act as a 3G modem on the move for other devices such as a laptop.

So, this first phone isn’t for businesses then. So who it’s for consumers?

Apple’s iPhone has the consumer end of the market strongly tied up. iPhone has a stronger browser plus communication and media software and probably has a better overall end-user experience than the G1. iPhone also has Google Maps (as does Windows Mobile) and while Apple’s hardware looks premium and high-end, the T-Mobile G1 already looks dated.

Google seem to be basing their strategy on third party taking up the device and writing software for it. I have no doubt that many software developers will develop software for this device although innovative new software packages will be driven by demand and I’m not convinced there is a whole lot of demand for Google G1 right now. A lot of the benefits being used to market the G1 are already available on existing iPhone or Windows Mobile devices.

So get a what for Christmas?

My two top phones for Christmas would have to be the (HTC manufactured) Sony Ericsson Experia X1 and the HTC Touch HD. Both phones have an iPhone beating WVGA (800×480) crystal-clear display and will ship with all the high-end hardware trimmings.

The HTC Touch HD is almost exactly the same size as an iPhone (and uses an on-screen keypad), while the Experia X1 is a little thicker and taller (but less wide) than the iPhone but comes with an integrated curved keyboard. The demos I’ve seen of the Experia make the new “Panels” interface look slow whilst the Touch HD “TouchFlo 3D” interface is fast.

If the HTC Touch HD is significantly lower than the Sony Ericsson Experia we’ll have a solid Windows Mobile alternative to the iPhone. Release is scheduled for next month (November) and I can’t wait! 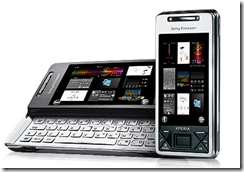 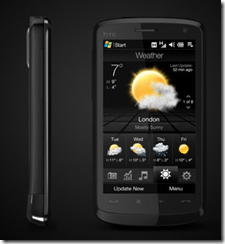 What if I want a phone now?

The HTC Touch Pro is the updated version of the HTC TyTN II (see my review of the TyTN II here). It has a larger and clearer screen, an improved build quality and stock software interface. 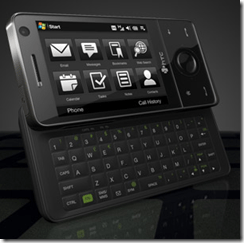 Expect prices of the Touch Pro to fall once the Touch HD and Experia are released onto the networks.

Next post: Change? Yes we can – spark our biz on cloud 9