If on Friday you went to lunch with your stockbroker and put $50,000 on a contract for differences (rent stock and ‘sell’ now then buy back later) on Apple’s stock, went home and posted the below message on CNet and sold your stock two hours later you’d have made over $2,500 before you even thought about your mid-afternoon cup of coffee.

Why are Apple shares down?

Because of a rumour posted on CNet that the visionary Apple founder, Steve Jobs, had suffered a heart attack. This is a fake story with a real effect on the heart of Apple (pun intended), pushing their stock down around 5 points within a couple of hours as investors made emergency sales of their long (buy now, sell later) positions on Apple stock. 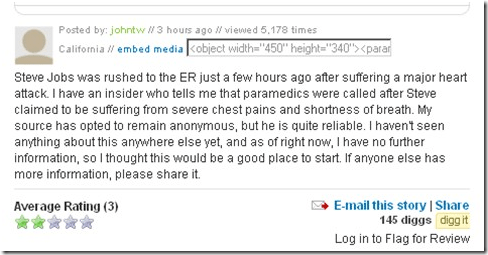 “Steve Jobs was rushed to the ER just a few hours ago after suffering a major heart attack. I have an inside who tells me that paramedics were called after Steve claimed to be suffering from severe chest pains and shortness of breath. My source has opted to remain anonymous, but he is quite reliable. I haven’t seen anything about this anywhere else yet, and as of right now, I have no further information, so I thought this would be a good place to start. If anyone else has more information, please share it.” – “johntw”

Obviously if this was a purposeful manipulation of the stock market it would be illegal. But it goes to show how much influence it is possible to wield on the internet, even anonymously, especially when offering false information on a public company or individual. 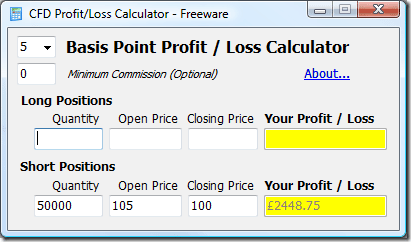 It’s a very simple application that will assist you in calculating both long and short positions and even take into consideration commission (as cost) on both the opening and closing trade.

Thanks to Steve for the heads up. “If this isn’t the best time to buy Apple shares then I don’t know when is!”.