Google today released their new open-source web browser for Windows, “Google Chrome”. It builds upon Mozilla Firefox but doesn’t replace it, yet. I’ve been using Chrome for all of 15 minutes and this article is a whistle-stop tour through the unique selling points.

Google Chrome has a very easy installation which offers to import all your settings from Internet Explorer and Firefox into itself as well as providing shortcuts of itself. Installation is very quick. 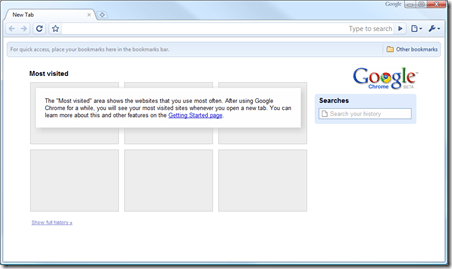 The minimalist web browser misses a lot of the usual controls. Most notably the separate web address (URL) entry field and search boxes of Internet Explorer and Firefox have merged into a single bar with automatic suggestion called Omnibox which saves space and improves usability for novice users. Opera does this too, so it’s not exactly new. The bottom of the web browser, like Apple’s Safari browser has no status bar. Also conspicuous by absence are the menu toolbar (no File, Edit, View here) and no obvious buttons for book marking or printing the current page.

Google Chrome’s default homepage automatically shows thumbnails of the pages you visit most often, which can be launched with a single click. Mozilla Firefox has a similar feature, providing a drop down menu of your most visited items and both browsers will search your history whenever you start to type a web address into their web address (URL) bars.

When visiting a password protected site, Google Chrome offers to save passwords in exactly the same fashion as Mozilla Firefox. I wonder if the new web browser shares much of Firefox’s code?

Popups are handled in an interesting way; they appear only within the tab that they came from. This is particularly useful if you’re browsing a site which pops up a warning to say you’ve been signed out of the site after a certain amount of inactive time. It also means that you won’t get a cluttered desktop from the popups of a badly designed website.

The tabs themselves can be dragged between Google Chrome windows. Nice.

If you have a need to browse the web without leaving behind an audit trail in your history you can view web pages in “Incognito” mode. I know a lot of users have the need to rabidly keep their history deleted and Google Chrome might just be the ideal web browser for this person. Look! the icon even has a hat, dark glasses and appears to be wearing an overcoat.

On the subject of the history; it’s semi-permanently recorded. You can’t erase individual history items and nor can you remove or change the items shown on your startup “Most visited” page. This is a bit of an oversight, since I visited a lot of sites during this review that I don’t really want on my most visited and I can’t easily change the page from “Most Visited” to “Most Visited Favourites”.

It’s fast. This new browser just feels like it’s not carrying around any excess flabby code around it’s waistline. The browser itself is multithreaded so it executes tasks on as many cores as your CPU has. Internet Explorer 7.0 is predominantly single threaded, although Internet Explorer 8.0 will support dual and quad core CPUs. Google Chrome has it’s own Task Manager too, so now you can see exactly what sites are using your precious resources. 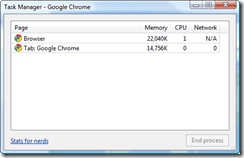 Google claim that their JavaScript engine (the bit of the application that processes all the client side code) used heavily in web applications is twice as fast as Firefox 3 and Safari 4. I haven’t tested but my instincts tell me this might not be far off the mark.

Like all modern browsers, Google Chrome checks online blacklists to determine if the site you’re browsing is known to be harmful (phishing or malware). Each tab is isolated so that anything that happens in one tab doesn’t affect any other. In other words if you visit a harmful website, it will not be able to access any of your other tabs or windows. Useful if you had your online banking details on one tab and a previously undiscovered harmful website on the other.

Google Gears is supported (a plugin architecture) as well as what looks like a nifty way to debug Javascript from Google Chrome’s new “Javascript Console”. 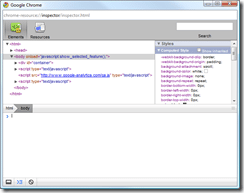 After all the fuss over Microsoft’s Internet Explorer releases being notoriously poor for following standards, this release of Google Chrome fares better, but it’s still very poor for a release from one of the world’s biggest and most innovative software companies. Google Chrome receives only 73/100 from the Acid3 test page on the Web Standards Project which tests for amongst other things, the popular Javascript standards. Although it’s still ahead of Internet Explorer 7.0 (which gets a poor 14/100), I found that several web pages do not display correctly. Including some of my own, which I know should be compliant. More on this below.

Despite having such a strong open source development base, Google Chrome couldn’t render some sites correctly. Furthermore my current project, Software Monitor (http://www.software-monitor.com) doesn’t show any data on Google Chrome. Thanks for the extra workload, Google. Just what I need right now!

Google Chrome looks good. I hope they continue to work on the remaining standards issues before they push this product out there. I’m sure there are a lot of Javascript-heavy websites that will not function correctly and because of this alone I cannot recommend that the end user evaluates Google Chrome until the beta period is over. I’m sticking with Firefox 3 for the time being and I’m looking forward to seeing how Microsoft will respond with Internet Explorer 8.

Are you using Google Chrome yet? What do you think of it?

Previous post: Are you using a pirated copy of Windows XP?