Yesterday Microsoft released the first service pack 1 for Visual Studio 2008 and also a service pack for the .NET framework version 3.5. There are some much needed improvements to both the development tools and the runtime but there are still some big issues with the .NET framework (like the 231 MB download) that will put a lot of users off getting up to date. 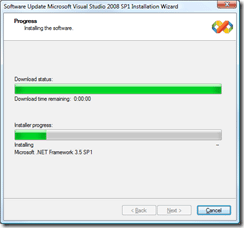 Microsoft have just released an update to the 3.5 version and for the first time are calling the update, “SP1” rather than giving it a new version number. The new version can improve the loading time and performance of .NET applications by 20-35%, and as such I highly recommend our customers install the latest version of the .NET framework on their machines.

This service pack will also improve the hardware acceleration of your .NET applications that support using Microsoft’s “WPF” technology. We don’t yet, but we are looking into incorporating this technology in our future desktop software releases.

It will also come with a set of new WPF controls such as a WPF-enabled DataGrid; I’m looking forward to investigating that. Also ASP.NET gets an MVC Framework and RESTful API; if you’ve used Java EE or PHP or Ruby you’ll notice the improvements.

To get around this issue, I have been testing various .NET linkers. These are tools which take your software, identify the connecting calls between your application and the framework and then strip the components out of the .NET framework and “link” the two together. I’m also able to slipstream the full .NET Framework installer into our software so that the framework will be added to a user’s machine in the case that they don’t already have it. The problem here is that the full installer for the .NET Framework 2.0 is 23 MB. Microsoft should not expect independent software vendors to be distributing their operating system updates in this way, but it is understandable that a lot of our customers and computer users in general will be confused by the need for the “.NET Framework”. The .NET Framework 3.5 is 231 MB. That’s a lot of overhead to add to your installer when your own application might only be 1-10 MB.

My suggestion to independent software developers

The .NET Framework 2.0 has finally reached a point where most users have it. There are a few who don’t, however and your software installers need to either bootstrap .NET 2.0 (23 MB) or point the user at downloading and installing it. If you’re feeling clever, you may even wish to try downloading the framework components as part of your installation process or using a “linker” to cut out .NET framework dependency altogether.

Alternatively to be sure all your users will have the .NET 3.5 pre-requisite for your software, wait for Vista SP2 and then label your software as “Vista only” 🙂

Go ahead and download and install the .NET Framework 3.5. Visit your users around the office and ensure that they have the latest .NET 3.5 service pack 1 applied. If your organisation has already migrated to SQL Server 2008, platforms running that database server will already have .NET 3.5 SP1.

You probably already have the .NET Framework 3.5. If you don’t, you’re missing out on all the latest AJAX-enabled web goodness. Assuming you have 3.5 already, get the service pack today. Lots of performance improvements and bug fixes as well as Microsoft’s new RESTful style API, which has finally made it into ASP.NET and levels the playing field with Ruby on Rails a little.

I hope this helps. Are you a software developer? Please leave a comment.

Next post: Are you using a pirated copy of Windows XP?