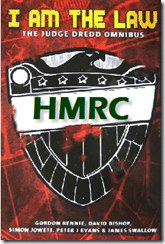 Anyone who has recently migrated to the UK from North Korea, China or the Islamic Republic of Iran in order to start a new live of freedom and a business will feel like they never left home now that new powers and penalties have been granted to our incumbent government’s fighting hand; HM Revenue & Customs.

Amongst the new powers (without safeguards) granted to HM Revenue & Customs is the unprecedented ability to conduct swooping raids on premises, including homes where businesses are registered. These raids can be conducted without a warrant; these powers would make a police officer blush (Police cannot raid without a magistrates warrant). Furthermore, a police raid to collect evidence must be done with the guidelines of the Police and Criminal Evidence (PACE) act. HM Revenue & Customs have already shown themselves as sneaky and conniving and in true Judge Dread style; deciding how guilty you are and setting whatever penalties they see fit as Judge, Jury and Executioner. Where the Police have to present accurate, truthful and unbiased evidence, HM Revenue & Customs need only fish for their own purposes. Police Officers do not receive benefits or bonuses for such “discoveries” and are bound by a code of conduct and duty of care; HM Revenue & Customs are not, as we repeatedly see stories of uneducated and unprofessional civil servants overstepping their authority time and time again without regulation and certainly without adequate punishment to the civil servant and compensation to the “customer”. The Institute of Chartered Accountants for England & Wales (think very clever accountants with plenty of time to read the full 442 page Finance Bill) have called for the Government to rethink these powers. The Government’s answer? “No.”. Actually their official position is that these powers will only be used for “criminal” type cases, but we all know that’s a pack of lies since they already have permission to obtain evidence for criminal cases via proper procedures, the Police and a Magistrates Warrant and the existing powers work just fine.

These new penalties apply on top of the existing legalisation to PAYE, VAT, Corporation Tax, Construction Industry Scheme, Capital Gains Tax and National Insurance. So just about everything then.

This is in addition to the whole rafter of penalties that HMRC already have and don’t replace or supercede existing penalties and legalisation, and represents an additional burden of worry for the taxpayer. So it’s not simpler or more consistent, is it?

You’d be lucky if you got Dread. Despite the truth of the situation, this is simply another way for HMRC to extract more tax. The words “careless”, “deliberate” and “conceals” are not defined. HMRC have the power to interpret these rules as they like up to the point that you decide to take them to the Special Commissioners – (the first time you’ll start to see common sense in the system). They will decide whether or not you are guilty and how guilty you are and what they can get away with.

Help those who try to comply?

It’s hard to read the HMRC guidance and not think of Fascism or Totalitarianism. They encourage you with a “substantial reduction in the level of penalty charged for unprompted disclosure of errors”. Yes, you read that correctly. If you make a genuine mistake and report it to HMRC, they’ll investigate and fine you. Nazism is a lesson for history, not a guidebook on how things should be done!

What can be done?

Assuming that you aren’t on the fiddle and are a hard working, respectable taxpayer;

If all this doesn’t work for you, why not join the 400,000 of UK citizens who emigrate for a better life overseas or to save cash and avoid Britain’s uncompetitive tax system?

Thanks to Ken from www.hmrconline.com for giving us the heads up on the penalties issue.