Well, we had the budget yesterday. Amongst the points raised was an inferred acknowledgement by Alistair Darling that the new tax wouldn’t work – yet. “Income Shifting” legalisation has been shifted back to April 2009. Does an unpopular tax put back sound familiar?It is evidence however that the pressure from business groups, members of the public and the MP’s who signed Early Day Motion 714 against the new tax were heard. If you did your bit to educate our wayward Government on how these proposals are totally unworkable, thank you.

I had another mention in Payroll World recently: 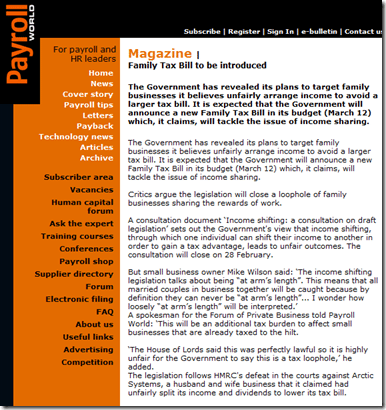 So, good news? Yes. But there are other problems with the Budget! (link to BBC news player).