Although I wasn’t unhappy with my three year old Toshiba M200, it was never going to be powerful enough to handle Windows Vista and still be snappy enough for the new Visual Studio 2008 from Microsoft. Despite a very heavy day to day workload, I don’t get the chance to get out now as often as I did in my days of contracting around the UK at client sites. However, as recent sales of the new Macbook air have shown, ultra-portable machines aren’t just bought by globe trotting road warriors. Simply put, ultra portables are lighter, thinner and being designed for portability – tending to favour a tighter form factor with robust construction over features. My Toshiba M200 had the usual Toshiba robustness and reliability, but didn’t have an internal optical drive or camera. Ultra portables are nearly always premium or luxury line models, with a higher price tag for the same performance point than their larger counterparts.

At the end of last summer around the time my son was born I decided to purchase a brand new laptop. The work that I do requires very high performance and I wanted something “ultra portable”. The choice in this market is between the Sony SZ and the Dell XPS M1330, both using Intel’s powerful new “Santa Rosa” Core 2 Duo platform. I chose the Dell XPS M1330

So what’s new? Well, my particular laptop was almost fully loaded. One of the first things you’ll notice about Dell is that they’ll sell you something cheaply, but if you want a good experience equivalent to the reviews around the internet, you’ll need to invest quite a bit in optional extras.

Let’s have a look at what’s so good about this laptop:

The main specifications for this review are an Intel Core 2 Duo T7500 (2.20 Ghz) and 2GB RAM (upgradable to 4GB). I didn’t get a solid state hard drive (SSD) as they were only available up to 64GB in size and turn out to be quite expensive (£800 at the time of writing). The technology for solid state disks should hopefully start to mature over the next 3-5 years and I’ll pick one up when the prices fall a little and capacity increases.

It’s customary to provide photographs of the boxes, so well, here they are: 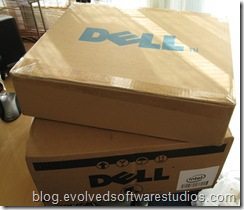 Inside the box you get: 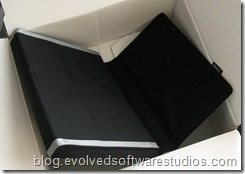 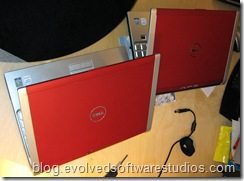 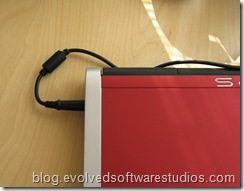 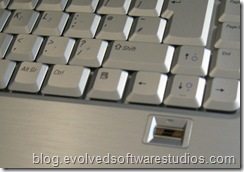 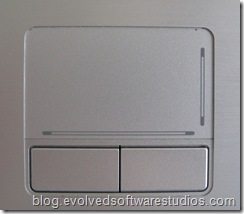 Touch & Heat Sensitive Media Controls
(I ran a finger across all the buttons):

Remote control (packs away neatly into the PCMCIA slot): 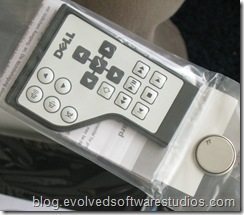 My M1330 has a soft touch crimson exterior, no creaks or rattles and notably the lid doesn’t have a clip to close or open it. You can order yours with a black or white lid if you don’t like red. The multimedia buttons along the top of the keyboard deck are touch and heat sensitive and glow when touched. All the buttons are very responsive and work well, although for volume I’d rather have a rotary analogue control so that I can ensure the volume really is off while in a meeting or public place. The chassis has a distinctive wedge shape with a very thin front profile, around half an inch tall which extends towards the back of the laptop which is around an inch tall.

The track pad is very responsive and the scroll areas to the edges work as well as any other laptop I’ve used.

The display is crisp and beautiful. The screen is 13.3 inches diagonal and comprise of a 1280×800 pixel wide screen. My previous Toshiba M200 had a smaller 12″ screen and a higher resolution – 1440×900. I would consider 1280×800 a minimum for any form of serious work although on a 13.3 inch wide screen it works exceptionally well. As with all ultra-portables, for Visual Studio or Photoshop work you will need to run your applications maximised to make best use of the limited screen real estate. DVD playback is flawless and additionally this laptop comes with a dual boot power button. Press the main power button to start Windows Vista or press the “Dell Media Direct” button to almost instantly boot into a cut-down XP media player which can access your presentations, media files or to play a DVD without booting into Windows. Combined with the inbuilt remote control this makes the Dell XPS M1330 the ultimate travelling entertainment companion.

What to look out for:

Conclusion: Dell’s new XPS M1330 is as thin and light as you would expect from this segment. They have done this without sacrificing features or performance.

So there you have it. A very advanced piece of quality kit!

Comments on this entry are closed.

Previous post: How to successfully prevent a CIS penalty