A recent article AccountingWeb reveals some rather interesting statistics on the CIS penalties for late monthly returns that UK Construction Companies have racked up since last October:

The number of penalty notices issued for late CIS monthly returns are shown as:

She adds, “So a total of 118,458 notices were issued in a three month period, bringing in fines of at least £11.8 million (as the minimum penalty is £100). Assuming that these three months are representative of a normal quarter, this would bring an annual yield from penalties for the new CIS 300 to over £47 million.”

Although we don’t know how many of these automatic penalties were issued in error (and hence would be invalidated under an appeal), we do know that the standard fine is £100, and the serious fine as high as £3,000 per subcontractor per month, which suggests a yield from just the monthly return of £47 million per year.

Under the new Construction Industry Scheme, every construction contractor must file a return called a CIS300 to be received by HM Revenue & Customs (HMRC) by the 19th of every month. Fines are sent out automatically for every subcontractor that was late in making their return. Further fines will be generated when the CIS300 is incorrect.

Just how many construction companies are there? When I asked HM Revenue & Customs CIS operators last February they didn’t know the numbers. However, they said they mailed out 250,000 letters about the new scheme. So if we assume HMRC sent letters our to all construction contractors, then we know that the number of contractors submitting late returns are:

average: 15.79% of all construction contractors will be late with their monthly returns and incur a minimum £100 fine.

This week I was speaking to a payroll lady for a large construction contractor who had received one of these fines in November. She sent in a paper CIS300 to HMRC by recorded delivery with plenty of time to spare. Despite having proof of receipt from the Royal Mail, the contractor was fined and will have had their good record tarnished – through no fault of their own. There are other stories, for example Peter on AccountingWeb wrote this week: “I have a client where HMRC have accepted – and acknowledged this in writing – that the return to 5 June was correctly submitted but their “system” insists on sending out a penalty notice of £100 each month for the period where they accept they were/are in error“.

Furthermore, incidents such as the above will cause contractors to lose their gross payment status. In the construction industry, being paid the total amount for your invoices is a privilege, which can be revoked at any time by HMRC. At the moment we don’t know how many late payment incidents it takes for a contractor to lose their gross payment status, and when a developer asked HMRC during the February conference, the spokesman wouldn’t say. HMRC may instruct your customers to automatically deduct 20% from your invoices at source through a process called “verification”. I should say at this point that our software allows contractors to perform online verifications of their subcontractors to determine this tax treatment status 🙂 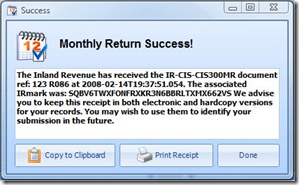 Since HM Revenue & Customs operate on a basis of “Guilty until proven innocent”, we recommend that all construction contractors take it upon themselves to obtain proof of a successful CIS300 Monthly Submission. You can do this by using new CIS Software such as our own low-cost CIS Solver or Insite123 software packages in order to submit your CIS300 Monthly Return online. By using our officially recognised software, you will bypass the paper-based goons at HM Revenue & Customs and submit your return directly onto their computers. Most problems with your return can be tested through our software so HM Revenue & Customs will not reject your return. If you send a paper return with errors or use other software there may not be enough time to correct your mistakes. You will avoid fines and obtain a verifiable receipt to prove your return was received and correct.

If you want to learn more about Evolved Software Studios, our products and prices, and how we can help you avoid the fines, please contact us at: www.evolvedsoftwarestudios.com.