Last month I posted a popular article on building your own small and energy efficient home or small office server. Late last night (UK time), Microsoft released the next generation of their popular “Windows Server” platform.

Windows Server 2008 inherently supports virtualisation. Virtualisation technology lets you run multiple “virtual” operating system platforms on a single host, much in the same way that VMWare and Virtual PC already do. Only now, Virtualisation is built in as part of the platform. The possibilities are exciting – it will be possible to run multiple “servers” and “computers” from a single server machine. It is also possible to split the tasks of a server into several instances – for example one virtual server OS for running Exchange, and another for running a web server and another for running a local database and file server.

This is good news for Internet web hosts too. It will be easier to set up and maintain a shared hosting service using secure virtual machines running integrated with the host server OS.

Windows Server 2008 is Microsoft’s preferred server partner for Vista workstations. Although Vista will work with other server platforms, Microsoft claim that Server 2008 is much faster with Vista.

It is likely that hardware channel partners such as Dell and HP will start to ship Server 2008 with their Windows Server offerings in the very near future. It is also likely that they will continue to ship Windows Server 2003 (particularly for Small Businesses) for at least the remainder of 2008. 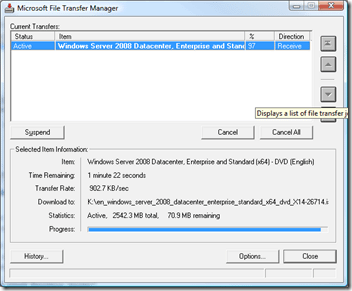 I don’t know when Server 2008 will hit the software reseller channels as a standalone software purchase. I imagine it would not be far off.

Server 2008 can be run as an upgrade from Server 2003, but bear in mind that this is a tricky path which might not be possible depending on which release candidate, service pack and server software that you have installed.

What about Small Business Server?

In addition to the usual “Standard” and “Enterprise” versions, Windows Server 2003 shipped in several additional flavours. One of which we have found incredibly popular, “Small Business Server 2003”. It is Windows Server 2003 is based on the “Standard” version and bundled with pre-installed Exchange, Fax Server and easy to use Server Tools. Microsoft have said that there will be a “Small Business Server 2008”, due for release by Q3 of 2008. We hope that this time there won’t be so much confusion

What about Vista SP1?

Vista SP1 was RTM today (Release To Manufacturing). However it won’t be available to the public (or even MSDN Subscribers) until mid-March. Usually when Microsoft releases a product to RTM it is almost immediately available (or within 24 hours at the latest). Microsoft plan to push Vista SP1 out to customers desktops (if customers have elected to receive these updates) automatically by Windows Update in April.

I am planning to migrate all server platforms (SQL Server, Exchange, Web Server and File Server) from Server 2003 to Server 2008. I will probably blog about this later 😉

If you have any comments or questions, feel free to ask them; the comment box below.

Next post: Windows Vista SP1: Ready, but not available yet?