Thanks to a friend at T-Mobile, my Kaiser arrived on the day of it’s official launch in the UK. There are many reviews of both these devices, so I will settle for explaining the differences between the two rather than a detailed review of either.

I’m only going to cover the main areas of difference, and those points missed by all the other review sites (and they missed a lot – maybe they all had pre-production reference models?). 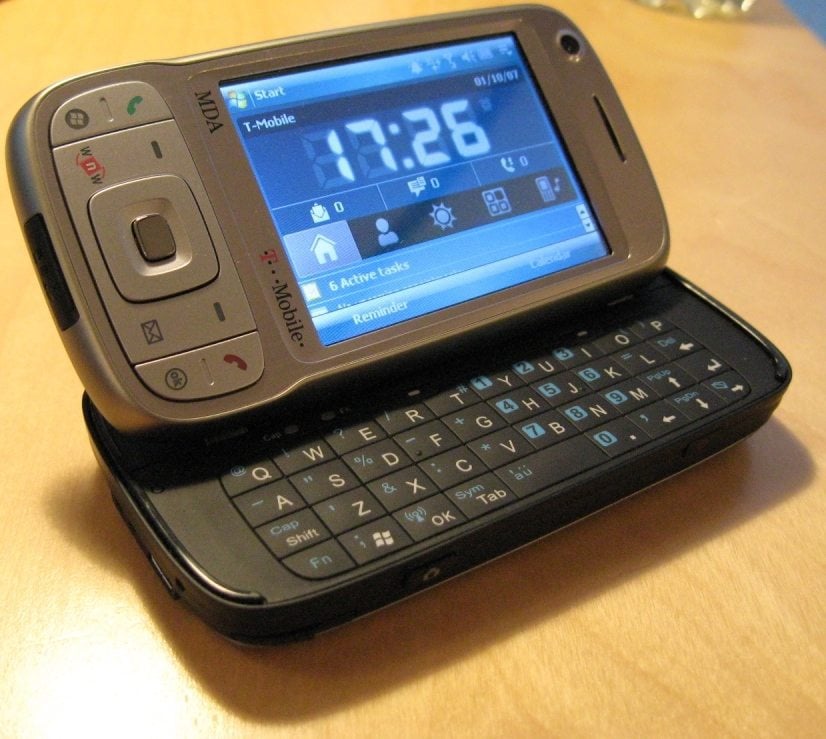 Both the TyTN and Kaiser are Windows Mobile devices, produced for a large number of resellers under OEM by HTC. This means that although the device might be called something else, their real model names are the “HTC Kaiser” (new) replacing the “HTC TyTN” (old).

The other official names you might know these devices as are the:

The HTC TyTN was a phenomenal phone/PDA combination. It was the first ever to provide HSDPA (broadband-like speeds) in a mobile phone. It is small, light and powerful. Early editions shipped with Windows Mobile 5.0 – but later editions contain the additional “Messaging and Security Pack” or Windows Mobile 6.0. I won’t go into the software comparison here, that’s another story.

You can tell these two devices are related, they’re basically the same size. The TyTN II is slightly smaller than the TyTN, and doesn’t protrude as much. The newer materials and finish feel of a much higher quality, the plastics feel more solid and the metallic sections have a brushed aluminium design. Side by side, the TyTN II has a distinctly upmarket feel.

The buttons are more defined than the TyTN and give a good response when pushed.

Take a look at these pictures (click for a detailed view):

TyTN II (left) and TyTN (right)
TyTN II buttons are all on the lower portion of the device. The D-PAD is 2mm wider and 2mm taller than previously. The enter push-button on the center of the D-PAD is no longer attached to the D-PAD. These are slight attention-to-detail improvements that make the device easier to use, and more attractive 🙂

You’re unlikely to miss not having a flashlight on the TyTN II since neither camera performs particularly well indoors or in low light situations. What you will definately miss on the TyTN II is a graphics accellerator chip. Taking a well timed and clear photograph with an unmodified TyTN II is like trying to thread a needle whilst completely drunk. It’s not going to happen until HTC provide the proper hardware support for this device.

TyTN (left) and TyTN II (right)
The TyTN II has a cool trick, it can tilt the display so that it operates like a laptop. This is particularly useful as it allows the screen to be visible whilst on any surface, without using a dock. So it can show you your email, allow you to type a document, or just be an expensive alarm clock 🙂

It is also worth mentioning that the sliding mechanism is much more elegant than the TyTN. The TyTN just slides on the rails, but the TyTN II springs closed and springs open and feels altogether more solid. It feels like this is done with magnets, but without opening it up, I can’t see how – it must be magic 😀 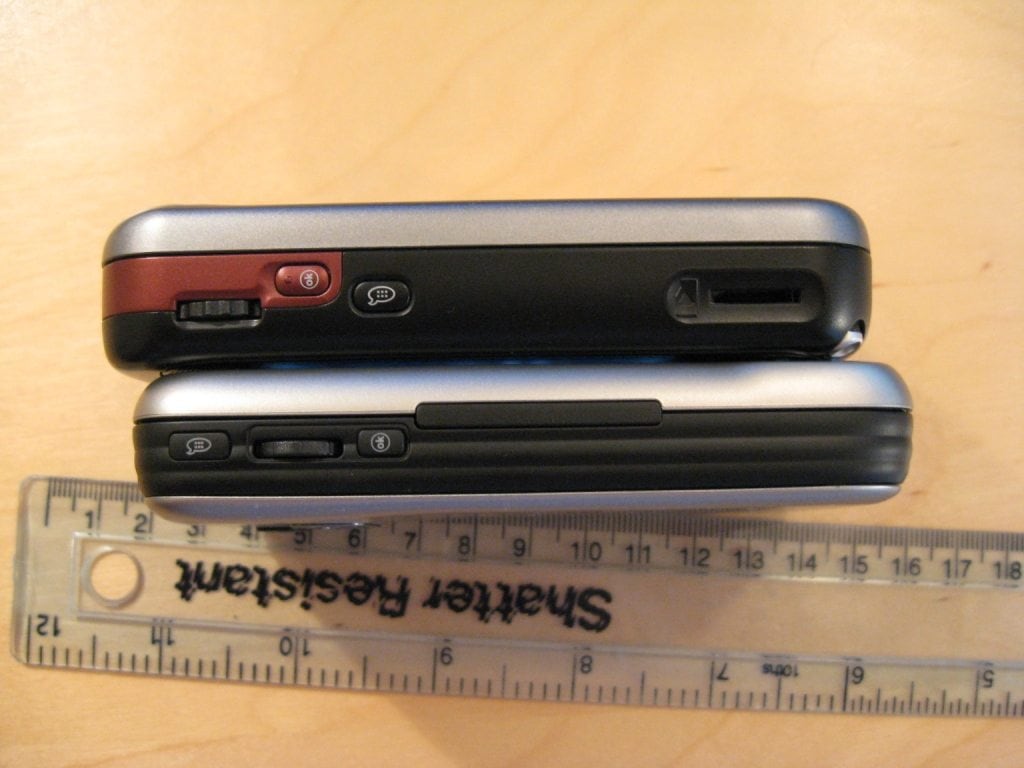 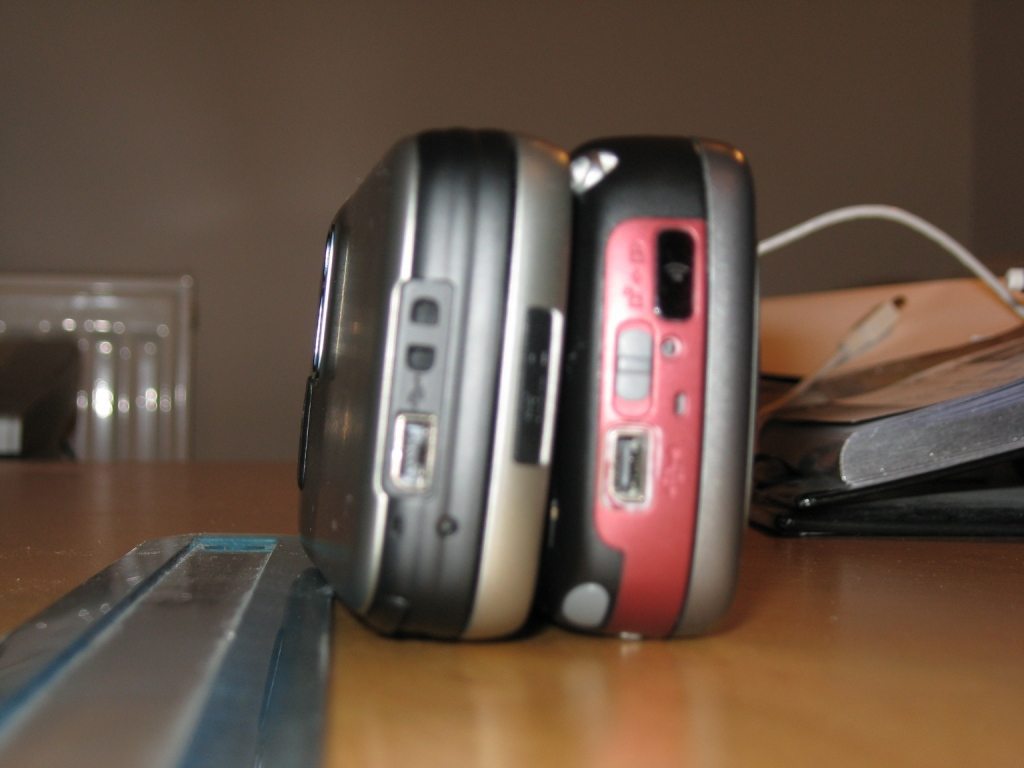 TyTN (right) and TyTN II (left)
TyTN does not come with an IR port, but does have a proper stylus (compared to the TyTN collapsable stylus).

There are only two negatives – no IR port and the TyTN II weighs more. Other review sites say the TyTN II weighs less than the TyTN. My kitchen scales show 180gms for the TyTN II, and 160gms for the TyTN. This means that you can more easily fit the PDA into your pocket, but you’ll feel it pulling a bit more. The lack of IR port is no big deal it has been depricated by bluetooth, wireless networking and mobile internet connection technologies.

Beauty is only skin-deep

Because the real changes are under the skin. HTC has done away with the Samsung 400mhz chip and replaced the entire chipset with a Qualcomm 7200 400mhz dual CPU with integrated Imageon hardware 2D/3D graphics accelerator.

What does this mean? Well, the Qualcomm is about 8 times faster at processing according to published benchmarks, and up to 20 times faster at graphical drawing. This makes the device feel fast and responsive when web browsing, composing emails, playing games, using the camera or remote desktop and other business applications. It even gives a substantial boost to TomTom GPS navigation software.

Speaking of GPS – this device has a built in receiver, which can be used as a feed to show your location in Google Maps, Live Search, TomTom or any other GPS software. It comes with a software utility called “QuickGPS” which downloads satellite information from the internet – up to 7 days in advance – which speeds up fix time dramatically. Without any modifications, I was able to get my first satellite fix into Google Maps within 10 seconds, and it was even able to track me around my garden. Very accurate.

Memory is doubled on the TyTN II – it now packs 128 MB RAM and 256 MB ROM. That’s plenty for almost everything, you don’t need to close down pocket internet explorer, opera, email or word to still use a GPS software application and make a phonecall without slowdown. This is a stark contrast to earlier Windows Mobile devices, which made even a simple google search take forever.

USB 2.0 support – the TyTN was just a USB 1.0 device. Faster sync rate means faster web browsing (if you use your TyTN II as a mobile data modem card) and faster ActiveSync.

Improved Camera – In addition to the front mounted VGA camera; It’s now got a 3.0 mp camera with autofocus. But no flash for night shots – this isn’t a big deal, since the device isn’t meant to replace your existing camera. Be aware that there are some press reference early-model TyTN II’s floating around, probably on eBay. These are the model 100, 110, they both are either missing the main camera or both main and front cameras.

.NET Compact Framework 2.0 – This is meant as a benefit for application developers who provide you with all those wonderful life-saving convenient Windows Mobile applications that make your life easier 🙂 expect to see more software for these devices over time.

HTC TouchFlo – This device came preloaded with the HTC TouchFlo software. It works by allowing finger-style navigation on lists of information. For example, your email can be navigated by running your finger over the emails and “spinning” the list up and down. It takes getting used to, but is a much easier way to navigate when you only have one hand free. Pocket Internet Explorer also supports HTC TouchFlo, allowing website navigation by allowing “flying” around the page using a finger. This has definately been inspired by the iPhone multi-touch interface, and there is a possibility that “Safari Mobile” might make it to Windows Mobile devices in the future. Microsoft are already working on their own mobile device web-browsing technology, “Deepfish” – but this project appears to have stalled as there haven’t been any updates in a while on this..

Absolutely! The iPhone doesn’t have 3G. Both TyTN and TyTN II have 3.5G – that’s broadband fast. EDGE is poorly supported and in the UK at least, the alternative to 3G is GPRS – which is slower than a slow dialup modem.

TyTN and TyTN II are both Windows Mobile devices. So you can use them to pick up your email from Exchange (direct Exchange integration). For businesses these devices can be locked down remotely (and even wiped remotely). For others, you can pick up your Hotmail, Yahoo Mail or Gmail directly with this device as it also supports the POP3 and IMAP protocols.

Should you need to work on a Word document, view a PDF, browse the internet, use MSN Messenger or Skype – you can. If you need to use your laptop – simply connect to it via bluetooth or USB cable and you’re instantly connected to the internet at broadband speeds.

What is not to love about these devices? Comments please!

edit: Thanks to jonc and drummer10630 from xda-developers for corrections on the above post!